The Grid: The Fraying Wires Between Americans and Our Energy Future (Hardcover) 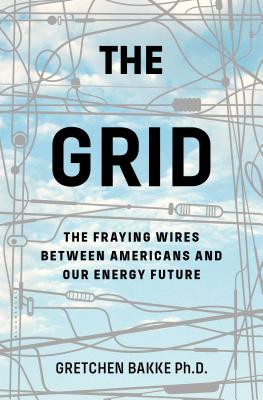 By Gretchen Bakke
Email or call for price.
Out of Print

One of Bill Gates's Favorite Books of 2016

A revelatory look at our national power grid--how it developed, its current flaws, and how it must be completely reimagined for our fast-approaching energy future.

America's electrical grid, an engineering triumph of the twentieth century, is turning out to be a poor fit for the present. It's not just that the grid has grown old and is now in dire need of basic repair. Today, as we invest great hope in new energy sources--solar, wind, and other alternatives--the grid is what stands most firmly in the way of a brighter energy future. If we hope to realize this future, we need to re-imagine the grid according to twenty-first-century values. It's a project which forces visionaries to work with bureaucrats, legislators with storm-flattened communities, moneymen with hippies, and the left with the right. And though it might not yet be obvious, this revolution is already well under way.

Cultural anthropologist Gretchen Bakke unveils the many facets of America's energy infrastructure, its most dynamic moments and its most stable ones, and its essential role in personal and national life. The grid, she argues, is an essentially American artifact, one which developed with us: a product of bold expansion, the occasional foolhardy vision, some genius technologies, and constant improvisation. Most of all, her focus is on how Americans are changing the grid right now, sometimes with gumption and big dreams and sometimes with legislation or the brandishing of guns.

The Grid tells--entertainingly, perceptively--the story of what has been called “the largest machine in the world”: its fascinating history, its problematic present, and its potential role in a brighter, cleaner future.

Gretchen Bakke holds a Ph.D. from the University of Chicago in Cultural Anthropology. She has done research on several failing nations, including the Soviet Union, the former Yugoslavia, and Cuba. She is a former fellow in Wesleyan University's Science in Society Program and currently an assistant professor of anthropology at McGill University. Born in Portland, Oregon, Bakke lives in Montreal and calls Washington, D.C. home when she's in the United States.

"The Grid is a lucid and thought-provoking book." - Wall Street Journal

"This book, about our aging electrical grid, fits in one of my favorite genres: 'Books About Mundane Stuff That Are Actually Fascinating.' . . . even if you have never given a moment's thought to how electricity reaches your outlets, I think this book would convince you that the electrical grid is one of the greatest engineering wonders of the modern world. I think you would also come to see why modernizing the grid is so complex and so critical for building our clean-energy future." - Bill Gates, "My Favorite Books of 2016"

"Bakke describes the grid as far more than towers and wires . . . She leads readers through a history of the grid and a maze of financial, legal, regulatory, and environmental considerations with sprightly good humor . . . Finally, Bakke sketches a possible design of the ‘intelligent grid’ of the future . . . A lively analysis." - Kirkus Reviews

"Hopefully, Bakke’s startling exposé revealing how electricity sloshes around the country across a precarious grid will be a wake-up call." - Booklist

"Gretchen Bakke shows that everything is, indeed, connected. If we want a cleaner energy future, we're going to need a smarter grid." - Elizabeth Kolbert, author of THE SIXTH EXTINCTION

"A remarkable achievement. Bakke deftly shows us how a system most of us are happy to ignore--the electrical grid--is both inseparable from everything we think of as civilization and on the verge of complete failure." - Paul Roberts, author of THE END OF OIL and THE IMPULSE SOCIETY

"If you want to keep your lights on, read The Grid. This is a smart, deeply reported, poetic book about how electricity moves through our lives (and why it sometimes doesn’t). It's a journey through the nervous system of the modern world, one with profound implications for climate change, national security, and ensuring America’s well-lit future." - Jeff Goodell, contributing editor Rolling Stone, author of BIG COAL

"Gretchen Bakke dives deep into the history of the electric power grid . . . The Grid is full of rich detail across a wide range of energy-related topics." - Science

"The revolution that impacts every American may not be televised, but, thanks to Gretchen Bakke, it is being written, and written in an extraordinary way. This book tells the compelling story of the invention that has powered the American economy unlike any other, and which was named by the National Academy of Engineering as the greatest engineering achievement of the 20th century. What will our future become as we transform it?" - Rye Barcott, Co-Founder and Managing Partner of Double Time Capital, a clean energy investment firm

All events will be held virtually until further notice.
END_OF_DOCUMENT_TOKEN_TO_BE_REPLACED