As the World Burns: The New Generation of Activists and the Landmark Legal Fight Against Climate Change (Hardcover) 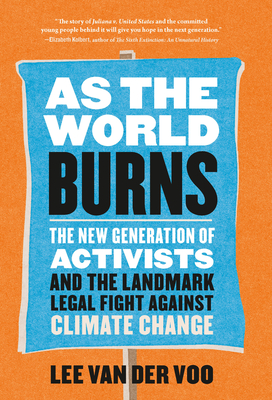 “The story of Juliana v. United States and the committed young people behind it will give you hope in the next generation.” —Elizabeth Kolbert, author of The Sixth Extinction

Do our children have a right to inherit a livable planet? Is the government obliged to protect it?

Twenty-one young people from across America have sued the federal government over climate change, charging that actions promoting a fossil fuel economy violate their constitutional rights to life, liberty, and property. Their trial could be the civil rights trial of the century, but the government has used arcane legal tactics to stymie its progress at every turn.

As the World Burns follows the plight of the young plaintiffs, chronicling their legal battle as their childhoods are consumed by another year of drought and wildfire, floods and hurricanes, and the most tumultuous political season in modern history.

The plaintiffs wrenchingly describe personal experiences with recurring “thousand-year” floods, wildfire smoke so thick they can’t ride a bike to school, drought that threatens family farms, and disappearing coastlines that send waves lapping ominously at their doors. Along the way, journalist Lee van der Voo weaves their experience into a broader narrative of America, where politics and policy threaten the very existence of our youth and our way of life. While acknowledgement of climate change seems increasingly optional in an America resistant to inconvenience, what she found was a group of young people who could indeed articulate, not only their own intense fears about the climate impacts already upending their lives, but a clear understanding of how deeply counter-interests were entrenched in their government and society. And how personal that was beginning to feel.

And yet, theirs is ultimately a story of hope.

As the World Burns is climate breakdown like you’ve never seen it—through the eyes of the young.

Lee van der Voo is an award-winning investigative and environmental journalist whose work has appeared in the New York Times, The Atlantic, and The Guardian, among others. Her 2016 book, The Fish Market, which chronicles the gentrification of the sea in the name of sustainable seafood, won an Oregon Book Award for General Nonfiction.

“The young people who brought the Juliana case are each remarkable, and together they paint a portrait of the next America, the one demanding real action so they too can have a working future on a working planet.” —Bill McKibben, author of Falter: Has the Human Game Begun to Play Itself Out?

“A gripping account of the Juliana case—and the twenty-one young plaintiffs who dared sue the US government for inaction on climate change. This book uncovers one of the most powerful forces shaping the contemporary world: youth activism.” —Liz Carlisle, author of Lentil Underground and winner of the Green Prize for Sustainable Literature

“This is no ordinary lawsuit—and no ordinary book. Reams will be written about the legal proceedings of Our Children’s Trust, but Lee van der Voo gives us the fully human story, exploring the emotional and psychological dimensions of each amazing young person’s participation. The lawsuit emerges as a defining moment in their lives—and in the life of this country.” —Dominique Browning, senior director and cofounder of Moms Clean Air Force

“The question of climate change is a simple one: Will our young people be allowed a future? This book details the struggles of young activists as they battle in the courts for the most basic right of all—the right to survive.” —Mark Lynas, author of Our Final Warning: Six Degrees of Climate Emergency

“A deeply human account of an extraordinary group of young people, a cast of characters whose courage, anguish, and idealism guide them through battle against entrenched power and a broken political system. Gripping, essential reading.” —Beth Gardiner, author of Choked: Life and Breath in the Age of Air Pollution

“A gripping account of the Juliana case—and the twenty-one young plaintiffs who dared sue the US government for inaction on climate change. This book uncovers one of the most powerful forces shaping the contemporary world: youth activism.” —Liz Carlisle, author of Lentil Underground and winner of the Green Prize for Sustainable Literature

“Lee van der Voo brings us into the lives and communities of the youth behind the case that exposed the inequitable impacts of climate change and elevated pressure for government action. The bravery of these young people and the urgency they sense should inspire us all in the global effort to create a more sustainable future.” —Lauren E. Oakes, author of In Search of the Canary Tree

“A well-paced, conversational narrative…a comprehensive look at the motivating factors that caused young adults to sue the government for a better future.” —Kirkus

“In 2015, 21 youth activists—including many from the Northwest—sued the federal government over its perpetuation of climate change. Oregon journalist Lee van der Voo follows the case, witnessing the fight for justice through the stories of the young.” —Seattle Met

“Like the repercussions of climate change itself, the book is heartbreaking as it’s not just the story of a lawsuit, it’s the story of the effects global warming has had on these children—some of whom have grown into adulthood over the years of the legal battle—and their communities.” —Eugene Weekly

“Readers who want to help move the needle beyond climate change denial can learn from the young people in As the World Burns.” —The Coast Weekend

“The heart of the book is the human story…it should inspire all Americans to consider what must be done to maintain a livable planet for the next, and the next, generation.” —Alaska Dispatch-News

All events will be held virtually until further notice.
END_OF_DOCUMENT_TOKEN_TO_BE_REPLACED