The Smurfs #9: Gargamel and the Smurfs (The Smurfs Graphic Novels #9) (Paperback) 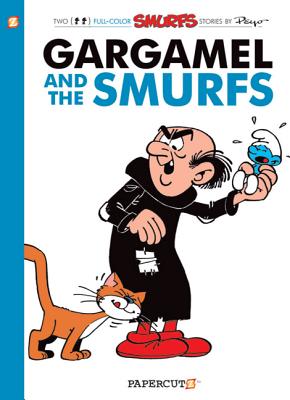 This is book number 9 in the The Smurfs Graphic Novels series.

Four Smurftastic stories all featuring the arch-enemy of the Smurfs, Gargamel! In "The Smurfnapper," which is also the first appearance of Gargamel, a Smurf is kidnapped by the evil wizard, who wants to use him as an ingredient in a potion. It's up to Papa Smurf and the rest of the smurfs to break into his lab and save their friend without ending up as a treat for Gargamel's cat Azrael. Also featuring "The Smurf Not Like the Others" and "The Smurfs and the Little Ghost."

Roland Goossand, popularly known as Gos, is a Belgian comics creator who was a frequent collaborator of Peyo's and wrote several Smurf stories. Gos also wrote many comics for the magazine "Spirou."

Peyo created The Smurfs in his comic strip "Johan and Peewit". Peyo wrote and drew over 8 extremely popular titles in Europe throughout his storied career. In 2008 the country of Belgium celebrated what would have been his 80th birthday by issuing a 5 Euro coin featuring his creation, The Smurfs.

All events will be held virtually until further notice.
END_OF_DOCUMENT_TOKEN_TO_BE_REPLACED