The Smurfs #7: The Astrosmurf (The Smurfs Graphic Novels #7) (Paperback) 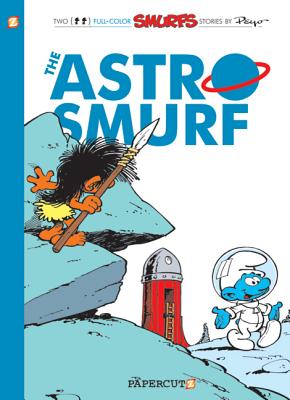 This is book number 7 in the The Smurfs Graphic Novels series.

When one of the Smurfs wants to travel to outer space, he tries to build a rocketship, but it fails to get off the ground and he grows depressed. Papa Smurf and the other Smurfs make a plan in order to cheer him up: putting him to sleep and waking him up in an elaborately staged "planet" filled by other Smurfs pretending to be aliens!

Roland Goossand, popularly known as Gos, is a Belgian comics creator who was a frequent collaborator of Peyo's and wrote several Smurf stories. Gos also wrote for the comic "Spirou" and launched his own comics titles in Belgium in the 1970's including "The Scrameustach."

Peyo created The Smurfs in his comic strip "Johan and Peewit". Peyo wrote and drew over 8 extremely popular titles in Europe throughout his storied career. In 2008 the country of Belgium celebrated what would have been his 80th birthday by issuing a 5 Euro coin featuring his creation, The Smurfs.

All events will be held virtually until further notice.
END_OF_DOCUMENT_TOKEN_TO_BE_REPLACED