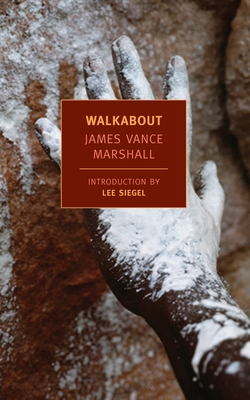 By James Vance Marshall, Lee Siegel (Introduction by)
$14.00
On Our Shelves Now

A plane crashes in the vast Northern Territory of Australia, and the only survivors are two children from Charleston, South Carolina, on their way to visit their uncle in Adelaide. Mary and her younger brother, Peter, set out on foot, lost in the vast, hot Australian outback. They are saved by a chance meeting with an unnamed Aboriginal boy on walkabout. He looks after the two strange white children and shows them how to find food and water in the wilderness, and yet, for all that, Mary is filled with distrust.

On the surface Walkabout is an adventure story, but darker themes lie beneath. Peter’s innocent friendship with the boy met in the desert throws into relief Mary’s half-adult anxieties, and the book as a whole raises questions about what is lost—and may be saved—when different worlds meet. And in reading Marshall’s extraordinary evocations of the beautiful yet forbidding landscape of the Australian desert, perhaps the most striking presence of all in this small, perfect book, we realize that this tale—a deep yet disturbing story in the spirit of Adalbert Stifter’s Rock Crystal and Richard Hughes’s A High Wind in Jamaica—is also a reckoning with the mysteriously regenerative powers of death.

James Vance Marshall is the pseudonym of Donald Payne (b. 1924). Only half a dozen Marshall novels have appeared in the last fifty years but they have sold several million copies and been translated into seventeen languages. Two, including Walkabout, have been made into films.

Walkabout is a work of collaboration between Donald Payne and the Australian James Vance Marshall (1887–1964). Marshall spent much of his life in the outback of Australia—a part of the world he knew intimately and loved deeply. He wrote a series of articles about the people, flora, and fauna of the outback, and with his permission, Payne used these articles as background for their novel Walkabout.

Subsequently, and with the consent of Marshall’s son, Payne continued to publish under the pseudonym Marshall; his most recent book is Stories from the Billabong (2008), a collection of Aboriginal legends retold as stories for children.

Lee Siegel is the author of four books, including Against the Machine: How the Web Is Reshaping Culture and Commerce—and Why It Matters and Are You Serious: How to Be True and Get Real in the Age of Silly. He has written essays and reviews for many publications, including Harper’s Magazine, The New Republic, The Atlantic Monthly, and The New York Times. In 2002, he received the National Magazine Award for Reviews and Criticism.

“A haunting little idyl in the same vein as A High Wind in Jamaica and Green Mansions tells of two children, a boy and a girl, sole survivors of a plane crash in the Australian bush. Their fragile veneer of modern culture clashes with the primitive soul of a black bush boy who is making his tribal ‘walkabout’ –a half-year’s solitary journey in the wilderness to test his fitness to be a member of his tribe.” —Time

“A small classic, pared down to the bare bones. Many will not only enjoy it, but long remember it.” —New York Times

“[Walkabout] is to Australians what Robinson Crusoe is to the English.” —The Philadelphia Enquirer

“[Walkabout] is pared down to its bare bones, like the ancient life in the desert, but if it is simple, it is not oversimplified, and it does not hesitate to face, honestly and unsentimentally, the questions it raises. . . . There will be many who not only enjoy it, but long remember it.”
—Elizabeth Janeway, The New York Times

A “much-acclaimed novel set in the Australian Outback” —Publishers Weekly

“This is a choice little tale which will have devoted admirers. It discloses a rare beauty of human relationship among three children in a strange predicament on the crust of the earth.” —Newsweek

“Very tender, very touching, and sketched out with no sign of strain. The descriptions of the Australian bush are first-rate.” —New Statesman (London)

“A sensitive and restrained tale which implies some pointed truths about the values of our civilization . . .” —The Critic

“Marshall is one of Australia’s greatest unsung, unread, and unappreciated writers. He wrote all his life in an innocent, simple, colloquial style. His stories were fables straight from the Australian earth.” —Herald

All events will be held virtually until further notice.
END_OF_DOCUMENT_TOKEN_TO_BE_REPLACED