Birds of a Feather (Hardcover) 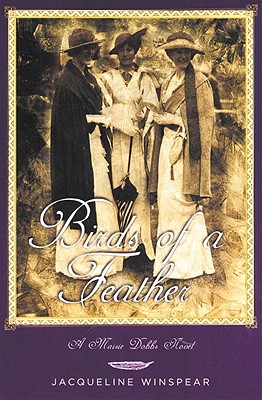 By Jacqueline Winspear
$25.00
Email or call for price.

"Maisie Dobbs is a quirky literary creation. If you cross-pollinated Vera Brittain’s classic World War I memoir, Testament of Youth, with Dorothy Sayers’s Harriet Vane mysteries and a dash of the old PBS series ‘Upstairs, Downstairs,’ you’d approximate the peculiar range of topics and tones within this novel. . . . Its intelligent eccentricity offers relief."—Maureen Corrigan, "Fresh Air" on NPR

"Deft. . . . Prepare to be astonished at the sensitivity and wisdom with which Maisie resolves her first professional assignment. . . . Winspear takes her through her ordeal with great compassion."—Marilyn Stasio, The New York Times Book Review

"Surprisingly fresh. . . . Winspear does a fine job with the ‘Upstairs, Downstairs’ aspects of the story, depicting the class tensions that inevitably arise as Dobbs climbs to a new station in life. Her progression from domestic staff to college student to wartime nurse to private investigator is both believable and compelling."—San Francisco Chronicle

Maisie Dobbs is back and this time she has been hired to find a wealthy grocery magnate’s daughter who has fled from home. What seems a simple case at first becomes complicated when Maisie learns of the recent violent deaths of three of the heiress’s old friends. Is there a connection between her mysterious disappearance and the murders? Who would kill such charming young women? As Maisie investigates, she discovers that the answers to all her questions lie in the unforgettable agony of The Great War.

Jacqueline Winspear was born and raised in England and later worked in publishing and as a marketing communications consultant in the U.K. before emigrating to the United States. She now lives in California and is a regular visitor to the United Kingdom. Birds of a Feather is her second novel featuring Maisie Dobbs.

All events will be held virtually until further notice.
END_OF_DOCUMENT_TOKEN_TO_BE_REPLACED