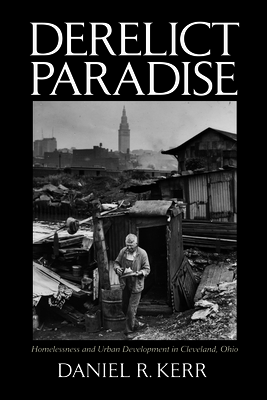 By Daniel Kerr
Email or call for price.
Not in stock

Seeking answers to the question, Who benefits from homelessness? this book takes the reader on a sweeping tour of Cleveland's history from the late nineteenth-century through the early twenty-first. Daniel Kerr shows that homelessness has deep roots in the shifting ground of urban labor markets, social policy, downtown development, the criminal justice system, and corporate power. Rather than being attributable to the illnesses and inadequacies of the unhoused themselves, it is a product of both structural and political dynamics shaping the city. Kerr locates the origins of today's shelter system in the era that followed the massive railroad rebellions of 1877. From that period through the Great Depression, business and political leaders sought to transform downtown Cleveland to their own advantage. As they focused on bringing business travelers and tourists to the city and beckoned upper-income residents to return to its center, they demolished two downtown working-class neighborhoods and institutionalized a shelter system to contain and control the unhoused and unemployed. The precedents from this period informed the strategies of the post-World War II urban renewal era as the new urbanism of the late twentieth century. The efforts of the city's elites have not gone uncontested. Kerr documents a rich history of opposition by people at the margins of whose organized resistance and everyday survival strategies have undermined the grand plans crafted by the powerful and transformed the institutions designed to constrain the lives of the homeless.

Daniel R. Kerr is an assistant professor of history at American University.

All events will be held virtually until further notice.
END_OF_DOCUMENT_TOKEN_TO_BE_REPLACED