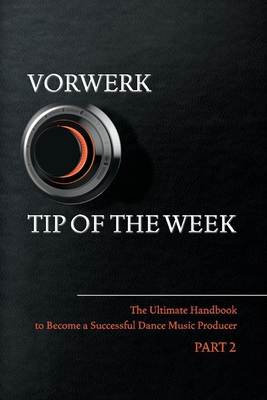 After part 1, world renowned dance music producer Maarten Vorwerk is back with 104 new tips and tricks. Completing a full 5 years of weekly tips. He shines his light on every aspect of the music industry but mostly focuses on practical mixing and producing advice. While producing and mixing you tend to forget some of the tricks over time and by having this book in your studio it will keep you sharp and inventive to keep trying out new things.So it doesn't matter if you are a beginner or a seasoned veteran, this will be your ultimate handbook.

Maarten Vorwerk is a prolific Dutch electronic dance music producer. He is currently based in The Netherlands and produces under a variety of aliases. Vorwerk is well known among the global elite of today's top DJs and producers and he's the force behind several massive clubland hits for big-name DJs. Earning recognition in the early-aughts with hardstyle productions under his Vorwerk and Jeckyll & Hyde pseudonyms, Vorwerk later veered into the more commercial side of dance music known as EDM as a ghost producer for other clubland stars. In 2007, Vorwerk scored his first "#1" hit in the Netherlands and Poland with "Freefall" under his Jeckyll & Hyde moniker. Soon thereafter, Vorwerk achieved his second "#1" hit in the Netherlands with the song, "Epic," a production with Quintino. A steady stream of Beatport and iTunes "Top 10" and "#1"-charting releases have brand-name DJs beating a path to Vorwerk's studio door.In 2017 he released his first best selling book 'Vorwerk- Tip Of The Week' full with practical tips on Mixing and producing and the music industry itself. He's currently dedicating more time in educating the new generation of music producers.

All events will be held virtually until further notice.
END_OF_DOCUMENT_TOKEN_TO_BE_REPLACED