Matilda: Be Outrageous: Big Ideas from a Small Girl (Hardcover) 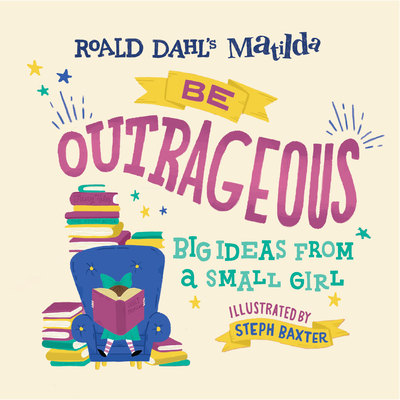 By Roald Dahl, Stephen Baxter (Illustrator)
$9.99
On Our Shelves Now

Am I a phenomenon? It is quite possible that you are.

Reimagine Dahl's beloved classic in this gorgeous, hand-lettered gift book perfect for Matilda fans of all ages! Featuring the best and brightest lines from Roald Dahl's magical story, this book displays the iconic quotes in whimsical and artful calligraphy, while reminding readers to be, first and foremost, outrageous!

Highly illustrated, with quotes, lines, and passages from one of Roald Dahl's most beloved books, this gift book presents a whole lot of big ideas from one precocious little girl. Each spread features the most memorable lines from Matilda, rendering them in gorgeous and whimsical calligraphy -- making this a must-have for any Dahl collection!

Roald Dahl (1916–1990) was born in Llandaff, South Wales, and went to Repton School in England. His parents were Norwegian, so holidays were spent in Norway. As he explains in Boy, he turned down the idea of university in favor of a job that would take him to "a wonderful faraway place." In 1933 he joined the Shell Company, which sent him to Mombasa in East Africa. When World War II began in 1939, he became a fighter pilot and in 1942 was made assistant air attaché in Washington, where he started to write short stories. His first major success as a writer for children was in 1964. Thereafter his children's books brought him increasing popularity, and when he died, children mourned the world over, particularly in Britain where he had lived for many years.

Stephen Baxter is a trained engineer with degrees from Cambridge and Southampton Universities. Baxter is the winner of both the British Science Fiction Association Award and the Locus Award, as well as being a nominee for an Arthur C. Clarke Award, most recently for Manifold: Time. His novel Voyage won the Sidewise Award for Alternate History in Long Form. He also won the John W. Campbell Award and the Philip K. Dick Award for his novel The Time Ships.

All events will be held virtually until further notice.
END_OF_DOCUMENT_TOKEN_TO_BE_REPLACED