In accordance with the governor's order, the Penguin Bookshop's physical store is NOW CLOSED.  You can continue to support us by ordering with us here on-line through our own website, penguinbookshop.com, through Bookshop.org and by downloading your audio books through libro.fm.   We are also covering our phones Monday through Saturday from 1000am - 200pm if you'd like to call in an order.  We are arranging non-contact home drop off for local orders or "outside bench pick-up".  If you have any questions, email us at staff@penguinbookshop.com  or call 412-741-3838 and if we do not answer we will get back to you within 24 hours. 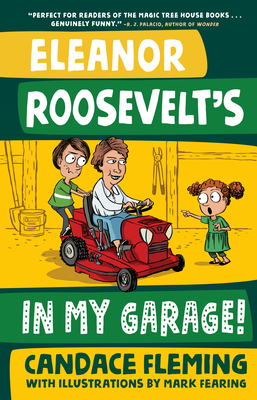 By Candace Fleming, Mark Fearing (Illustrator)
$13.99
On Our Shelves Now

In this hilarious follow-up to BEN FRANKLIN'S IN MY BATHROOM!, history and hijinks collide once more when Eleanor Roosevelt accidentally time travels to a ten-year-old's home in 21st-century America!

When Eleanor Roosevelt time travels to Nolan and Olive's house in modern-day Illinois, the kids don't know who she is at first. After all, she's old and wearing a hairnet. But the First Lady of the United States--some 80 years ago, that is-- isn't a mystery for long when she starts spouting things like "You must do the things you think you cannot do." Fresh off a visit from Ben Franklin, Nolan and Olive know what they're in for with this latest guest: an adventure. From drawing on ideals of civil protest to save the town park, to (almost) doing a loop-de-loop in a single-engine plane, to avoiding that know-it-all snoop Tommy Tuttle, there's one laugh after the next in this second book in the History Pals series. Fun back matter expands the story and unpacks the amazing life of Eleanor Roosevelt.

CANDACE FLEMING is the prolific author of The Family Romanov, a Sibert Honor Book and the recipient of both the Boston Globe-Horn Book Award and the Los Angeles Times Book Award for Young Adult Literature; Amelia Lost, which received four starred reviews; The Great and Only Barnum, an ALA-YALSA Award for Excellence in Nonfiction nominee and a Publishers Weekly and Booklist Best Book of the Year; The Lincolns: A Scrapbook Look at Abraham and Mary, a Boston Globe-Horn Book Award recipient; Our Eleanor, an ALA-ALSC Best Book for Young Adults; and Ben Franklin's Almanac, a James Madison Honor Book. She is also the author of many highly acclaimed picture books, including Oh, No!, illustrated by Eric Rohmann, and middle grade books, including The Fabled Fourth Graders of Aesop Elementary School and Ben Franklin's in My Bathroom! Visit her on the web at candacefleming.com or on Twitter at @candacemfleming.

MARK FEARING has created award-winning editorial cartoons and animated shorts that have appeared on Nickelodeon and G4 and was a production manager for Walt Disney Television Animation. He is also the illustrator of Ben Franklin's in My Bathroom! and Margaret McNamara's Three Little Aliens and the Big Bad Robot, published by S&W in 2011. Visit him on the web at markfearing.com or on Twitter at @MarkFearing.