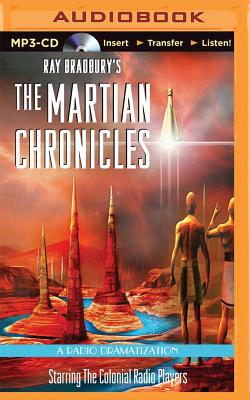 By Ray D. Bradbury, The Colonial Radio Players (Read by)
Email or call for price.
Not in stock

The people of Earth are preparing for war--a war that could potentially destroy the planet. Explorers are sent to Mars to find a new place for humans to colonize. Bradbury's Mars is a place of hope, dreams, and metaphor--of crystal pillars and fossil seas--where a fine dust settles on the great empty cities of a silently destroyed civilization. It is here the invaders have come to despoil and commercialize, to grow and to learn--first a trickle, then a torrent, rushing from a world with no future toward a promise of tomorrow. The Earthman conquers Mars...and then is conquered by it, lulled by dangerous lies of comfort and familiarity, and enchanted by the lingering glamour of an ancient, mysterious native race.

Ray Bradbury's The Martian Chronicles is presented here as a full cast audio production with an original music score and thousands of sound effects by the award winning Colonial Radio Theatre on the Air. It marks their fourth collaboration with one of the most celebrated fiction writers of our time--Ray Bradbury.