The Monarchy of Fear: A Philosopher Looks at Our Political Crisis (Paperback) 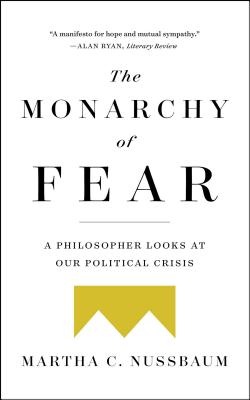 From one of the world’s most celebrated moral philosophers comes a thorough examination of the current political crisis and recommendations for how to mend our divided country.

For decades Martha C. Nussbaum has been an acclaimed scholar and humanist, earning dozens of honors for her books and essays. In The Monarchy of Fear she turns her attention to the current political crisis that has polarized American since the 2016 election.

Although today’s atmosphere is marked by partisanship, divisive rhetoric, and the inability of two halves of the country to communicate with one another, Nussbaum focuses on what so many pollsters and pundits have overlooked. She sees a simple truth at the heart of the problem: the political is always emotional. Globalization has produced feelings of powerlessness in millions of people in the West. That sense of powerlessness bubbles into resentment and blame. Blame of immigrants. Blame of Muslims. Blame of other races. Blame of cultural elites. While this politics of blame is exemplified by the election of Donald Trump and the vote for Brexit, Nussbaum argues it can be found on all sides of the political spectrum, left or right.

Drawing on a mix of historical and contemporary examples, from classical Athens to the musical Hamilton, The Monarchy of Fear untangles this web of feelings and provides a roadmap of where to go next.

Martha C. Nussbaum is the Ernst Freund Distinguished Service Professor of Law and Ethics, appointed in the Philosophy Department and the Law School of the University of Chicago. She gave the 2016 Jefferson Lecture for the National Endowment for the Humanities and won the 2016 Kyoto Prize in Arts and Philosophy. The 2018 Berggruen Prize in Philosophy and Culture, and the 2020 Holberg Prize. These three prizes are regarded as the most prestigious awards available in fields not eligible for a Nobel. She has written more than twenty-two books, including Upheavals of Thought: The Intelligence of Emotions; Anger and Forgiveness: Resentment, Generosity, Justice; Not for Profit: Why Democracy Needs the Humanities; and The Monarchy of Fear.

“An elegant and precise stylist, Nussbaum…writes about gut feelings like envy and disgust with an air of serene lucidity...one of the virtues of this slender volume is how gradually and scrupulously it moves, as Nussbaum pushes you to slow down, think harder and revisit your knee-jerk assumptions. [Nussbaum is] a skillful rhetorician…she wants to show how the feeling of fear is primal and therefore universal, reminding us that we were all helpless infants once, dependent on the kindness and mercy of others.” —New York Times Book Review

"An engaging and inviting study of humanity's long-standing fear of the other." —Kirkus, starred review

"Noted philosopher, prolific author and University of Chicago professor Martha Nussbaum assesses our current political crisis, which she argues is essentially a politics of blame and fear. From classical thought to the hit musical Hamilton, she uses a variety of examples to illustrate what brought us to this fraught place and how we can move forward." —Chicago Tribune

"One of America’s leading philosophers here probes this dangerous fusion of emotions, explaining Trump’s twenty-first-century ascendance as part of a distressing human dynamic manifested through history and around the globe...even readers skeptical about Nussbaum’s political orientation will welcome this call for an emotionally healthier public life. — Bryce Christensen, Booklist

“Nussbaum is an elegant and lyrical writer, and she movingly describes the pain of recognizing one’s vulnerability…” —Rachel Aviv, The New Yorker

“Nussbaum is one of the most accomplished political and moral philosophers of our time…there is almost no domain of political and moral life and thought that her work and apparently endless curiosity have not explored.” —William Adams, chairman of the National Endowment for the Arts

All events will be held virtually until further notice.
END_OF_DOCUMENT_TOKEN_TO_BE_REPLACED