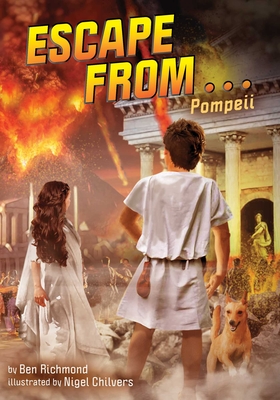 Mount Vesuvius is ready to erupt, threatening to destroy the city of Pompeii and everyone who lives there. Will new friends Thalia and Felix be able to escape, or are they destined to be buried under rock and ash?

Thalia is excited to visit the bustling city of Pompeii, while Felix longs to leave it. As Thalia prepares to perform with her traveling troupe of actors, Felix is searching for a life of adventure away from his strict, politician father. Despite living such different lives, when their paths cross, they quickly become friends.

Meanwhile, deep in the heart of Mount Vesuvius, a lethal fire is brewing. In its shadow, Pompeii awaits total destruction. The ground shakes, and the mountain rumbles. But when the volcano roars and clouds of ash rain down upon the city, will Thalia and Felix manage to escape one of the deadliest natural disasters in history?

Ben Richmond is the author of ten children's books on animals, the environment, and history. He has worked as a science journalist and now writes for Afropop Worldwide, a public radio program about music from Africa and the diaspora. When he isn't writing, he is playing guitar or riding his bike around Brooklyn, where he lives with his wife and their dog Lua. www.benrichmondwrites.com/

Nigel Chilvers was born and raised in Aintree, just outside Liverpool, UK. After completing an Art Foundation at Hugh Baird College, he went on to study Illustration at Wolverhampton University. He originally trained as a paper-based artist until switching over to digital work in 1997. Since then, he has worked for many years freelancing in licensing, working on many character-based books for Thomas the Tank Engine, Bob the Builder, Noddy, and much more. In his spare time, if he's not training for triathlons, he can be found climbing the fells of the Lake District or the North Welsh mountains.

All events will be held virtually until further notice.
END_OF_DOCUMENT_TOKEN_TO_BE_REPLACED