The Only Woman in the Room: A Novel (Hardcover) 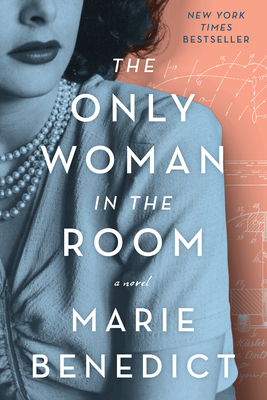 Her beauty almost certainly saved her from the rising Nazi party and led to marriage with an Austrian arms dealer. Underestimated in everything else, she overheard the Third Reich's plans while at her husband's side, understanding more than anyone would guess. She devised a plan to flee in disguise from their castle, and the whirlwind escape landed her in Hollywood. She became Hedy Lamarr, screen star.

But she kept a secret more shocking than her heritage or her marriage: she was a scientist. And she knew a few secrets about the enemy. She had an idea that might help the country fight the Nazis…if anyone would listen to her.

A powerful novel based on the incredible true story of the glamour icon and scientist whose groundbreaking invention revolutionized modern communication, The Only Woman in the Room is a masterpiece.

"Once again, Benedict shines a literary spotlight on a historical figure whose talents and achievements have been overlooked, with sparkling results. The Only Woman in the Room is page-turning tapestry of intrigue and glamour about a woman who refuses to be taken for granted. Spell-binding and timely." — Fiona Davis, national bestselling author of The Masterpiece

"Benedict paints a shining portrait of a complicated woman…Readers will be enthralled." — Publishers Weekly

"[A] compelling fictionalized biography pays tribute to the overlooked scientific contributions and the hidden depths of a stunning beauty and beloved movie star." — Booklist

"Relevant today, especially women’s worth in a man’s world… a worthy read about this gorgeous and talented woman." — New York Journal of Books

"The fictional account Marie Benedict has woven is insightful, moving, and impossible to put down!" — Shelf Awareness

"A spellbinding reading experience that implies that even celebrities are still human just like everyone else in the world." — Midwest Book Reviews

Events may be virtual or in person. Please see details for each event.
END_OF_DOCUMENT_TOKEN_TO_BE_REPLACED