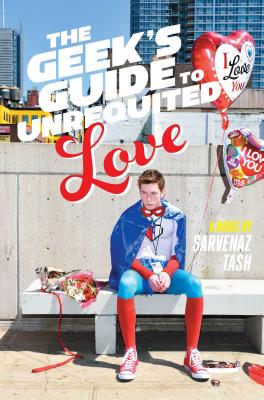 By Sarvenaz Tash
Email or call for price.
Not in stock

John Hughes meets Comic Con in this novel about a teenager who is trying to get his best friend to fall in love with him that’s an “unabashed love letter and delightful inside joke for comic enthusiasts” (Kirkus Reviews).

Graham met his best friend, Roxana, when he moved into her neighborhood eight years ago, and she asked him which Hogwarts house he’d be sorted into. Graham has been in love with her ever since.

But now they’re sixteen, still neighbors, still best friends. And Graham and Roxy share more than ever—moving on from their Harry Potter obsession to a serious love of comic books.

When Graham learns that the creator of their favorite comic, The Chronicles of Althena, is making a rare appearance at this year’s New York Comic Con, he knows he must score tickets. And the event inspires Graham to come up with the perfect plan to tell Roxy how he really feels about her. He’s got three days to woo his best friend at the coolest, kookiest con full of superheroes and supervillains. But no one at a comic book convention is who they appear to be...even Roxy. And Graham is starting to realize fictional love stories are way less complicated than real-life ones.

Sarvenaz Tash is the author of The Geek’s Guide to Unrequited Love (a YALSA Top Ten Quick Pick for Reluctant YA Readers), Three Day Summer, The Mapmaker and the Ghost, and Virtually Yours. She was born in Tehran, Iran, and grew up on Long Island, New York. She received her BFA in film and television from NYU’s Tisch School of the Arts, which means she got to spend most of college running around and making movies (it was a lot of fun). She has dabbled in all sorts of writing including screenwriting, Emmy Award–winning copywriting, and professional tweeting for the likes of Bravo and MTV. Sarvenaz currently lives in Brooklyn, New York, with her family.

"With the exacting eye of an anthropologist and the generous heart of a true geek, Sarvenaz Tash has crafted something very special with The Geek's Guide to Unrequited Love. Hilariously funny, heart-wrenchingly true and tender, this is a book of super-heroic achievement."
— Scott Snyder, New York Times bestselling author of Batman, American Vampire and Wytches

"The Geek's Guide to Unrequited Love promises romantic misadventures and pop culture references but delivers so much more. Never have I fallen in love with a group of characters so quickly. Funny, fast-paced, and full of heart, this is the kind of book you'll read in one sitting, and then be a little sad that it's over."
— Paula Stokes, author of The Art of Lainey and Girl Against the Universe

"An unabashed love letter and delightful inside joke for comic enthusiasts who were fans long before Hollywood made geek culture chic. Best of all, the novel captures the joyous spirit of Comic-Con and fantasy's ability to provide its devotees with a community through which to contextualize their joys and sorrows. A lighthearted and engaging romp for anyone who loves Spidey and Gwen's upside-down kiss in the rain."
— Kirkus Reviews

*"As Tash introduces a cast of charming, goofy, and diverse characters, she uses the hopeful voice of a young man in the throes of first love to gently poke fun at fandom while celebrating the passion and camaraderie of the community."
— Publishers Weekly, STARRED REVIEW

All events will be held virtually until further notice.
END_OF_DOCUMENT_TOKEN_TO_BE_REPLACED