Cure for the Common Universe (Paperback) 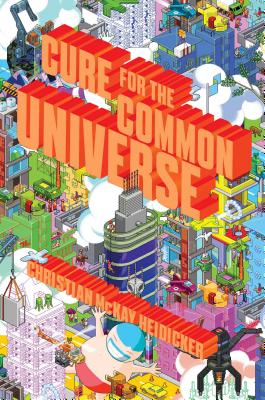 Prepare to be cured by this quirky and hilarious debut novel about a sixteen-year-old loner who is sent to rehab for video game addiction—“perfect for teen gamers and readers who are fans of Jesse Andrews and John Green” (School Library Journal).

Sixteen-year-old Jaxon is being committed to video game rehab…ten minutes after meeting a girl. A living, breathing girl named Serena, who not only laughed at his jokes but actually kinda sorta seemed excited when she agreed to go out with him.

In rehab, Jaxon can’t blast his way through galaxies to reach her. He can’t slash through armies to kiss her sweet lips. Instead, he has four days to earn one million points by learning real-life skills. And he’ll do whatever it takes—lie, cheat, steal, even learn how to cross-stitch—in order to make it to his date.

If all else fails, Jaxon will have to bare his soul to the other teens in treatment, confront his mother’s absence, and maybe admit that it’s more than video games that stand in the way of a real connection.

From a bright new voice in young adult literature comes the story of a young man with a serious case of arrested development—and carpal tunnel syndrome—who is about to discover what real life is all about.

Christian McKay Heidicker watched a lot of TV as a kid. (Probably too much.) It disturbs/enthralls him to think that the characters he was watching were sentient. (They probably were.) Attack of the 50 Foot Wallflower is his second novel. His first novel, Cure for the Common Universe, was about how he plays too many video games. Learn more at CMHeidicker.com.

"This is perfect for teen gamers and readers who are fans of Jesse Andrews and John Green. An excellent purchase for YA shelves."
— School Library Journal

“A plugged-in young adult comedy about the pain of unplugging… perfect for teen gamers and readers who are fans of Jesse Andrews and John Green.”
— School Library Journal

“Heidicker’s debut crackles with twitchy energy… this is a fun, absurdist romp through gaming culture, populated by zany characters and a quest narrative worthy of its own game.”
— Booklist

“Where the novel really shines is in Jaxon's interactions—as a white, upper-middle-class boy—with campmates who are diverse in terms of both ethnicity and sexuality, and who challenge some of his preexisting assumptions. In confronting Jaxon's privilege and complicated family history, the book eschews easy answers for a more authentic ending that promises that the work of self-improvement is ongoing and difficult.”
— Publishers Weekly

“This novel is reminiscent of Vizzini’s The Other Normals or Yang’s Level Up. Notably (and happily), however, it avoids the typical game-blaming and recognizes excessive time online as the symptom, not the cause, of these kids’ problems…Gamer readers will flock to this novel and fall in love with its insider jokes, game-allusions, and snarky attitude."
— The Bulletin of the Center for Children’s Books

"As a game-versus-life story, this novel is reminiscent of Vizzini’s The Other Normals or Yang’s Level Up. Notably (and happily), however, it avoids the typical game-blaming and recognizes excessive time online as the symptom, not the cause, of these kids’ problems."
— BCCB

All events will be held virtually until further notice.
END_OF_DOCUMENT_TOKEN_TO_BE_REPLACED