Egghead: Or, You Can't Survive on Ideas Alone (Hardcover) 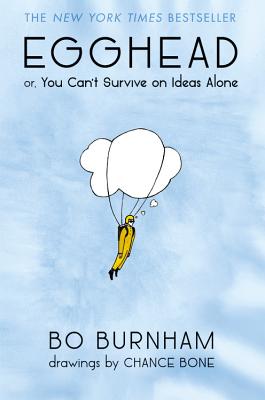 The bestselling strange and charming collection of hilariously absurd poetry, writing, and illustration from the director of Eighth Grade and the writer and star of Bo Burnham: Inside.

Bo Burnham was a precocious teenager living in his parents' attic when he started posting material on YouTube. 100 million people viewed those videos, turning Bo into an online sensation with a huge and dedicated following. Bo taped his first of two Comedy Central specials four days after his 18th birthday, making him the youngest to do so in the channel's history. Now Bo is a rising star in the comedy world, revered for his utterly original and intelligent voice. And, he can SIIIIIIIIING!

In Egghead, Bo brings his brand of brainy, emotional comedy to the page in the form of off-kilter poems, thoughts, and more. Teaming up with his longtime friend, artist, and illustrator Chance Bone, Bo takes on everything from death to farts in this weird book that will make you think, laugh and think, "why did I just laugh?"

Bo Burnham is a comedian, songwriter and actor. Comedy Central Records released his first full-length self-titled album in 2009, Words Words Words in 2010, and his album entitled what. in 2013. The MTV series Zach Stone Is Gonna Be Famous, a mockumentary which Bo created, wrote, directed, and starred in, premiered in May 2013.

"You have to be brave to be this hilarious, and this sweetly romantic. And of course, a lot of talent helps. Egghead is a remarkable piece of writing!" --Jack Handey, author of The Stench of Honolulu and the Deep Thoughts series

"Like Walt Whitman, Bo Burnham has made the transition from an internet comedy sensation to a soulful poet. No, not that Walt Whitman. A different guy." --Conan O'Brien

"I would love Bo Burnham's hilarious book even if he weren't my son." --Judd Apatow

All events will be held virtually until further notice.
END_OF_DOCUMENT_TOKEN_TO_BE_REPLACED