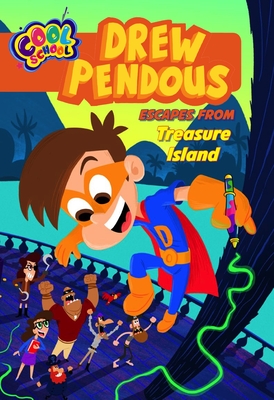 This is book number 4 in the Drew Pendous series.

Story time turns into battle time as Drew Pendous and Ms. Booksy get pulled into Treasure Island and must fight their way out The Cool School YouTube channel is a sensation, with more than one million subscribers We all get drawn into our favorite books--but it literally happens to Drew Pendous and Ms. Booksy when they read Treasure Island together. Then nasty Captain Hooksy adds a Cruel School twist that will trap them in the story forever. Can Drew and his Mighty Pen Ultimate save the day when they're forced to face a crew of mean pirates?

Driver Studios is a youth and family entertainment company that creates original content for kids, including the Cool School series on YouTube. Cool School and Drew Pendous were created by writer/producer Rob Kurtz. Rob has written and/or produced over 100 hours of prime-time television, including Boy Meets World and Grace Under Fire, as well as the Fox animated film Everyone's Hero (2006). Rob previously served as the creative director for the Children's Publishing Group, Worthwhile Books. At Driver Studios, Rob has overseen creative content for Nickelodeon, Mattel, American Girl, DreamWorks, and Fox Family Films. Rob Kurtz lives in the New York City area.

All events will be held virtually until further notice.
END_OF_DOCUMENT_TOKEN_TO_BE_REPLACED