Rilla of Ingleside (An Anne of Green Gables Novel) (Paperback) 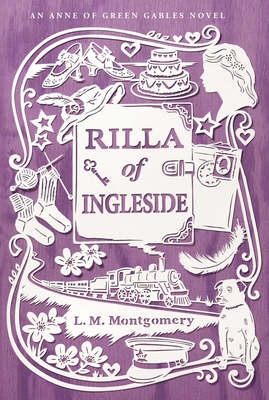 Rediscover Anne Shirley and her adventures in this beautiful edition of L.M. Montgomery’s classic.

The youngest daughter of Anne and Gilbert meets the trials of World War I with irrepressible spirit in this artfully packaged edition of the sixth book in the Anne of Green Gables series.

Anne’s children are almost grown up, except for pretty, high-spirited Rilla. No one can resist her bright hazel eyes and dazzling smile. Rilla, nearly fifteen, can’t think any further ahead than going to her very first dance at the Four Winds lighthouse and getting her first kiss from handsome Kenneth Ford. But undreamed-of challenges await as the world of Ingleside becomes endangered by a faraway war. When her brothers go off to fight and Rilla brings home an orphaned newborn in a soup tureen, she is swept into a drama that tests her courage and leaves her changed forever.

Lucy Maud Montgomery (November 30, 1874–April 24, 1942) publicly known as L.M. Montgomery, was a Canadian author best known for a series of novels beginning with Anne of Green Gables, published in 1908. Anne of Green Gables was an immediate success. The central character, Anne, an orphaned girl, made Montgomery famous in her lifetime and gave her an international following. The first novel was followed by a series of sequels. Montgomery went on to publish twenty novels as well as 500 short stories and poems. Because many of the novels were set on Prince Edward Island, Canada and the Canadian province became literary landmarks. She was awarded Officer of the Order of the British Empire in 1935.

All events will be held virtually until further notice.
END_OF_DOCUMENT_TOKEN_TO_BE_REPLACED