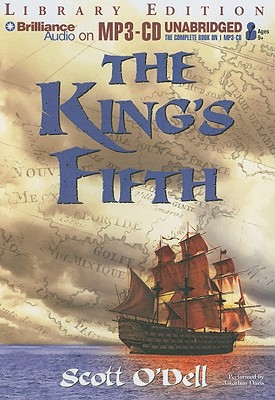 By Scott O'Dell, Jonathan Davis (Performed by)
Email or call for price.
Hard to Find

There were seven of them when they left the summer camp of Coronado's army and struck out into that unknown land, which is now our great Southwest, to find the golden cities of Cibola. Writing in his cell during the days of his trial for withholding the King's Fifth, or royal share of treasure, Esteban de Sandoval, a young mapmaker, recalls all that happened since they left. The greedy and gold-hungry Captain Mendoza led the party, with an Indian girl, Zia, as a guide, on a hazardous expedition. For Esteban it was all an unbelievable adventure until the moment when he held in his hand a piece of the desired gold and for the first time felt its awful power.

Motivations and characterizations are finely drawn...in this excellent novel of the sixteenth century which brings to life people and events. "Library Journal," starred review

What a day to celebrate the day an author who has written a magnificent book comes through with another one which is equally magnificent Scott O Dell is the author, "The King's Fifth" is the book he has created to join his multiple prize winner "Island of the Blue Dolphins" among the greats on young people's bookshelves...It is the story of two journeys...together they make for a magnificent book. "Publishers Weekly"

Compelling, deeply felt story of a boy who, almost too late, comes to realize the awful cost of the lust for gold in honor and human life. "Booklist"

All events will be held virtually until further notice.
END_OF_DOCUMENT_TOKEN_TO_BE_REPLACED