A Humorous History Of The United States: From The Magic Lamp Classic Humor Series (Paperback) 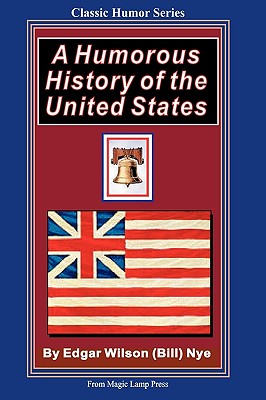 As the biography of Mr. Nye to the right side of this page indicates, it's very possible that he might have been an influence on the producers of humorous history films like Mel Brooks' "History of the World." Nye starts the book with a letter delivered to Queen Isabella of Spain, advising her that if she grows tired of her current staff 'discover, ' that a new one named Chris is recommended. Ultimately, she decided to put up a couple of bucks for this young fellow, and the rest is, well... you know. From what Nye tells us, "America had many other discoverers besides Columbus, but he seems to have made more satisfactory arrangements with the historians that any of the other." Having set the tone with those first two chapters, Nye continues to chronicle the growth of this great country all the way up the Chicago World's Fair in 1893, when the country was so fully developed that there probably wouldn't be room for much more improvement.

Not to be confused with the modern-day television personality Bill Nye the Science Guy, this author and humorist was born Edgar Wilson Nye (1850 - 1896), and started using the pen name of Bill Nye due mainly to the popularity of Bret Harte's character Bill Nye, in his 1870 poem Plain Language from Truthful James. Over a period of about seven years, Nye contributed humorous articles to the Denver Tribune, and soon his reputation as a clever, witty writer began to spread... but it was in an 1881 edition of a newspaper called Boomerang that caught the attention of the entire nation. This was Nye's own paper, and he was one of the first successful self-published authors, naming the paper after his own mule, Boomerang. Back in those days, almost every one of the famous newspapers around the country had a staff humorist, and they occasionally published the writings of humorists from competing newspapers. As a result of this exposure Nye's popularity spread to England At the height of his career, Nye was reported to be the most widely read and highest paid writer in the United States, and there was a hint of jealousy for his success on the part of his most famous contemporary, Mark Twain. Nye's career was severely hampered by an attack of cerebrospinal meningitis, but that didn't affect his sense of humor. He even joked about his illness by writing: "If the spinal cord could be taken out and hung over a clothesline and cleansed with benzene, and then treated with insect powder, or rolled in corn meal, or preserved in alcohol, then put back, it would be all right, but you can't. You pull a man's spine out of his system and he is bound to miss it, no matter how careful you have been about it."

All events will be held virtually until further notice.
END_OF_DOCUMENT_TOKEN_TO_BE_REPLACED