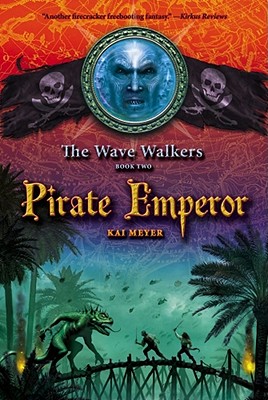 In the vast Caribbean Sea, pirates Jolly and Griffin are stranded on a tiny island where a peculiar architect is building an enormous bridge -- but to where? Another world? Before they can find out, the bridge bursts into flames and the kobalins attack. Jolly and Griffin have nowhere to run until the Ghost Trader mysteriously appears and carries them off to the magical coral city of Aelenium. It is from Aelenium that Jolly and Munk are supposed to descend far, far into the deep to keep out the world-devouring Maelstrom.

But Jolly isn't ready for that task. She wants to rescue Captain Bannon, the only father she's ever known, so she steals the ghost ship and sets sail. Griffin follows her, until he is trapped by the man in the whale. Princess Soledad has her own plans -- to kill Pirate Emperor Kendrick. But the truly terrifying cannibal king stands in her way. Is Soledad ready to become the new pirate emperor?

Events may be virtual or in person. Please see details for each event.
END_OF_DOCUMENT_TOKEN_TO_BE_REPLACED