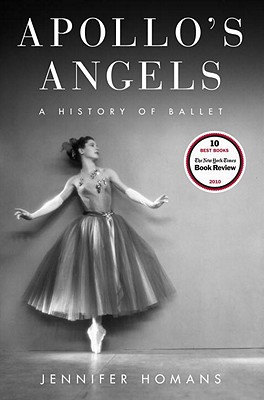 By Jennifer Homans
Email or call for price.
Not in stock

For more than four hundred years, the art of ballet has stood at the center of Western civilization. Its traditions serve as a record of our past. A ballerina dancing The Sleeping Beauty today is a link in a long chain of dancers stretching back to sixteenth-century Italy and France: Her graceful movements recall a lost world of courts, kings, and aristocracy, but her steps and gestures are also marked by the dramatic changes in dance and culture that followed. Ballet has been shaped by the Renaissance and Classicism, the Enlightenment and Romanticism, Bolshevism, Modernism, and the Cold War. Apollo’s Angels is a groundbreaking work—the first cultural history of ballet ever written, lavishly illustrated and beautifully told.

Ballet is unique: It has no written texts or standardized notation. It is a storytelling art passed on from teacher to student. The steps are never just the steps—they are a living, breathing document of a culture and a tradition. And while ballet’s language is shared by dancers everywhere, its artists have developed distinct national styles. French, Italian, Danish, Russian, English, and American traditions each have their own expression, often formed in response to political and societal upheavals.

From ballet’s origins in the Renaissance and the codification of its basic steps and positions under France’s Louis XIV (himself an avid dancer), the art form wound its way through the courts of Europe, from Paris and Milan to Vienna and St. Petersburg. It was in Russia that dance developed into the form most familiar to American audiences: The Sleeping Beauty, Swan Lake, and The Nutcracker originated at the Imperial court. In the twentieth century, émigré dancers taught their art to a generation in the United States and in Western Europe, setting off a new and radical transformation of dance.

Jennifer Homans is a historian and critic who was also a professional dancer: She brings to Apollo’s Angels a knowledge of dance born of dedicated practice. She traces the evolution of technique, choreography, and performance in clean, clear prose, drawing readers into the intricacies of the art with vivid descriptions of dances and the artists who made them. Her admiration and love for the ballet shines through on every page. Apollo’s Angels is an authoritative work, written with a grace and elegance befitting its subject.

Jennifer Homans was a professional dancer trained at the North Carolina School of the Arts, American Ballet Theatre, and The School of American Ballet. She performed with the Chicago Lyric Opera Ballet, the San Francisco Ballet, and Pacific Northwest Ballet. Currently the dance critic for "The New Republic," she has written for "The New York Times," the "International Herald Tribune, ""The New York Review of Books, " and "The Australian." She earned her B.A. at Columbia University and her Ph.D. in modern European history at New York University, where she is a Distinguished Scholar in Residence.

"It has never been done before, what Jennifer Homans has done in Apollo’s Angels. She has written the only truly definitive history of the most impossibly fantastic art form, ballet….Homans accomplishment is akin to setting the most delicate and beautiful of all the imperial Faberge eggs into a fissure high on Mount Rushmore and tracking its unlikely survival…Inspired…The story of Balanchine has been told before, and at greater lengths, but never better…An eloquent and lasting elegy to an unlasting art."
—COVER REVIEW, THE NEW YORK TIMES BOOK REVIEW

"A tour de force…the publication of Apollo’s Angels is itself a moment in the magnificent history of classical dance."
—THE WALL STREET JOURNAL

"Magisterial… Apollo’s Angels is a cultural history of the highest order…Homans brings to the page a practical knowledge gained in an earlier career as a dancer. Thus she leaps easily from big picture political trends in one sentence to the minutiae of a dancer’s steps in the next, from how dances were made to who the patrons were…Fascinating reading."
—BOOKFORUM

"Here is a book of immense ambition—a one volume history of ballet—and of considerable accomplishment….Homans shows herself to be both dogged and graceful as a historian—a rare and welcome combination of qualities…I follow her gratefully through the centuries as she traces the progress of ballet from its beginnings…Her deft intelligence and lively voice keep the book from sounding too academic, and its vast stock of information is cogently organized."
—NEW YORK REVIEW OF BOOKS

"It’s hard to believe that a book like Jennifer Homans’s Apollo’s Angels, on a topic of such obvious interest and importance, has never been written before, but it apparently hasn't, and lovers of the ballet are lucky that it is Homans—herself a former dancer and the dance critic for The New Republic--who took up the task."
— Harper's Magazine

"Homans brings her intimate experience as a dancer and her discerning dance critic’s eye to her fascinating and exquisitely detailed history of ballet, an art that combines rigor and idealism….[a] glorious landmark study of ballet’s ideals and enchantment."
— BOOKLIST, starred review «

"An important and original work of cultural history…Her cultural critique, as well as her expansive and penetrating view of ballet’s history, recommend this book to all readers who care about the history of the arts as well as their present and possible future."
— PUBLISHERS WEEKLY, starred review «

"Each page of this luminous work delights, enlightens and beckons.   Every dancer should live with this book, of course, but every person who loves literature and history, is word-struck and story-addicted, should give themselves a treat with Apollo’s Angels. Treasure this treasure.”—Jacques d’amboise

“This is a wonderful book about how ballet evolved.  Written by a gifted dancer,  Apollo's Angels is dance history seen from the inside.  The wonder to me is how much this accessible, beautifully-crafted book reveals about the times and places in which ballets were made; it makes culture come alive.” —Richard Sennett, author of The Craftsman

"A dancer who is also a historian -- who ever dreamed of such an improbable creature? But here is Jennifer Homans and her indispensable book. She puts the understanding of ballet on a whole new footing. Finally the delicacies of ballet have been restored to the indelicacies of history, and the art seems even more wondrous for it. Apollo's Angels is an enlightenment, a remarkable feat of scholarship and sensibility, an affecting mixture of criticism and devotion, an intellectual joy."—Leon Wieseltier

All events will be held virtually until further notice.
END_OF_DOCUMENT_TOKEN_TO_BE_REPLACED