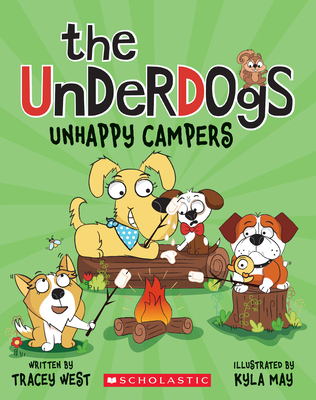 The third chapter book in this fun, highly illustrated series about four dog best friends who learn that being yourself is much more fun than being Best in Show. From the bestselling author of Dragon Masters and the illustrator of Diary of a Pug!

The Underdogs and their classmates are taking a break from competing in the K-9 exams to go on a camping trip! The fourth years at Barksdale Academy are heading to Camp Ruffing It for a few days of hiking, swimming, and roasting marshmallows by an open fire.

Or, that was the plan. But Harley keeps getting distracted by all the sounds and smells in the forest. Every time she runs after a chipmunk or a shiny fish, she accidentally messes things up for her friends. Can Harley stay focused long enough to save the rest of the camping trip? Or is it back to civilization for the Underdogs?

With black-and-white illustrations on every page and hilarious antics throughout, this series is perfect for readers who are just starting to read chapter books on their own, or for anyone who loves a good underdog story!

Kyla May is an Australian illustrator, writer, and designer. She is the creator and illustrator of two early chapter book series: Lotus Lane (Chemin du Lotus) and Diary of a Pug (Journal d’un carlin). She is also the illustrator of The Sloth Life and The Underdogs series. In addition to books, Kyla creates animation. She lives by the beach in Victoria, Australia, with her three daughters.

Tracey West is the author of the New York Times bestselling series Dragon Masters, for Scholastic Branches. She has written more than 400 books for children, including the Underdogs series, illustrated by Kyla May; the Pixie Tricks series, illustrated by Xavier Bonet, and the perennially popular Pokémon chapter books. She lives with her husband, adopted dogs, and chickens in the western Catskill mountains of New York State.

All events will be held virtually until further notice.
END_OF_DOCUMENT_TOKEN_TO_BE_REPLACED