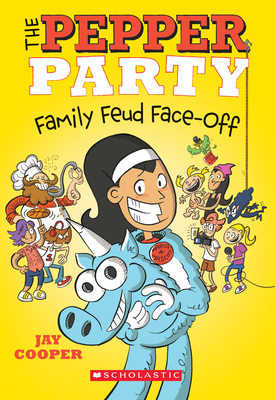 This is book number 2 in the The Pepper Party series.

Enough is enough when one of the Peppers decides to divorce her family in this hilarious comedy for fans of The Simpsons and Family Guy.
Meet the Peppers.
Funny runs in the family.

Maria Pepper wants to win her school's mascot competition. But her tryout goes terribly! Her always-embarrassing family manages to humiliate her for the millionth time. So Maria decides enough is enough. The Pepper Party is about to get one person smaller!

Jay Cooper has worked as a creative director and designer of magazines, books, apparel, and advertising for two decades. He's had the good luck to design covers for New York Times bestsellers as well as literary classics, and the even better luck to work on art and advertising campaigns for over 100 Broadway musicals and plays. However, nothing makes him happier than returning to his literature-loving roots and creating and illustrating stories for kids. He lives with his wife and children in Maplewood, New Jersey.

Praise for The Pepper Party:

Praise for The Spy Next Door: Mutant Rat Attack!:

All events will be held virtually until further notice.
END_OF_DOCUMENT_TOKEN_TO_BE_REPLACED