Go Back to Where You Came From: And Other Helpful Recommendations on How to Become American (Paperback) 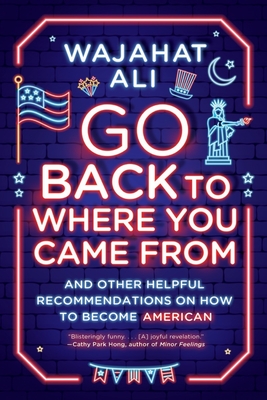 “Go back to where you came from, you terrorist!”

This is just one of the many warm, lovely, and helpful tips that Wajahat Ali and other children of immigrants receive on a daily basis. Go back where, exactly? Fremont, California, where he grew up, but is now an unaffordable place to live? Or Pakistan, the country his parents left behind a half-century ago?

Growing up living the suburban American dream, young Wajahat devoured comic books (devoid of brown superheroes) and fielded well-intentioned advice from uncles and aunties. (“Become a doctor!”) He had turmeric stains under his fingernails, was accident-prone, suffered from OCD, and wore Husky pants, but he was as American as his neighbors, with roots all over the world. Then, while Ali was studying at University of California, Berkeley, 9/11 happened. Muslims replaced communists as America’s enemy #1, and he became an accidental spokesman and ambassador of all ordinary, unthreatening things Muslim-y.

Now a middle-aged dad, Ali has become one of the foremost and funniest public intellectuals in America. In Go Back to Where You Came From, he tackles the dangers of Islamophobia, white supremacy, and chocolate hummus, peppering personal stories with astute insights into national security, immigration, and pop culture. In this refreshingly bold, hopeful, and uproarious memoir, Ali offers indispensable lessons for cultivating a more compassionate, inclusive, and delicious America.

Wajahat Ali is a New York Times-contributing writer, recovering attorney, and tired dad. His work has appeared in the Atlantic, New York Review of Books, and other outlets. He lives in Washington, DC.

Wajahat Ali’s deeply personal and keenly perceptive memoir is a clear-eyed account of his American immigrant experience.… We are all fortunate to be on the receiving end of not only his intellect, but his humanity and heart.
— Katie Couric, Emmy Award-winning journalist

This is the book I’ve been hoping Wajahat Ali would write for ten years—hilarious, stylistically fearless, deeply humane.
— Dave Eggers, author of The Every

Wajahat Ali has already proven that he is the fastest mind on TV. Now his fans can sample his brilliance on the page.
— Ishmael Reed, author of The Terrible Fours

This book is a tour de force—equal parts tragedy and laugh-out-loud comedy. With brazen wit, rigorous analysis, and searing insight, Wajahat Ali speaks to the first-generation American’s dilemma of being both ‘us’ and ‘them.’
— Suleika Jaouad, author of Between Two Kingdoms

A hilarious and heartwarming treatise on what it truly means to be American in the twenty-first century. You’ll be laughing so hard you won’t even notice the inevitable Islamic takeover of America! Oops, I’ve said too much.
— Reza Aslan, author of God: A Human History

Wajahat Ali brilliantly and lovingly unpacks the complicated history and urgent lived experience of being otherized in America.… [A] rich feast for all the senses—a must-read.
— S. E. Cupp, author of Losing Our Religion

This powerful and moving book is, at its heart, a love story. The beloved, flawed and tragic -- so flawed, so tragic -- is America. The lover's hope is always undermined. And yet his hope somehow endures.
— Mohsin Hamid, author of Exit West

Find a place on your bookshelf between Mark Twain and James Baldwin. Read this book before putting it there.
— Timothy Snyder, author of On Tyranny

With wit and charm, Ali has delivered a masterful meditation on growing up brown in America...An intoxicating rejection of cynicism in the face of existential threats to multiracial democracy, and a clear-eyed call to arms against the forces seeking to stop the expansion of American democracy. An affirmation of the country America could be.
— Mara Gay, editorial board - New York Times

In prose at times hilarious and at other times deeply moving, Wajahat Ali chronicles a uniquely American experience. All will benefit from reading his story.
— Representative Ilhan Omar

Full of wisdom and compassion, not to mention Ali’s signature humor. As educational as it is entertaining. I wish my nine-year-old immigrant self had this book when the playground kids were telling me to go back where I came from.”
— Gary Shteyngart, author of Our Country Friends

Events may be virtual or in person. Please see details for each event.
END_OF_DOCUMENT_TOKEN_TO_BE_REPLACED