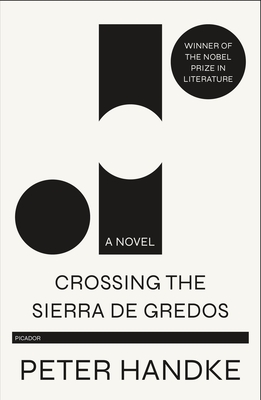 By Peter Handke, Krishna Winston (Translated by)
$19.00
On Our Shelves Now

In this visionary novel, Nobel Prize winner Peter Handke offers descriptions of objects, relationships, and events that teach readers a renewed way of seeing; he creates a wealth of images to replace those lost to convention and conformity.

On the outskirts of a northwestern European river port city lives a powerful woman banker, a public figure admired and hated in equal measure, who has decided to turn from the worlds of high finance and modern life to embark on a quest. Having commissioned a famous writer to undertake her "authentic" biography, she journeys through the Spanish Sierra de Gredos and the region of La Mancha to meet him. As she travels by all-terrain vehicle, bus, and finally on foot, the nameless protagonist encounters five way stations that become the stuff of her biography and the biography of the modern world, a world in which genuine images and unmediated experiences have been exploited and falsified by commercialization and by the voracious mass media.

Crossing the Sierra de Gredos is a very human book of yearning and the ancient quest for love, peopled with memorable characters (from multiple historical periods) and imbued with Handke's inimitable ability to portray universal, inner-worldly adventures that blend past, future, present, and dreamtime.

Peter Handke was born in Griffen, Austria, in 1942. A novelist, playwright, and translator, he is the author of such acclaimed works as The Moravian Night, A Sorrow Beyond Dreams, The Goalie's Anxiety at the Penalty Kick, and Repetition. The recipient of multiple literary awards, including the Franz Kafka Prize and the International Ibsen Award, Handke is also a filmmaker. He wrote and directed adaptations of his novels The Left-Handed Woman and Absence, and co-wrote the screenplays for Wim Wenders’ Wrong Movie and Wings of Desire. He won the Nobel Prize for Literature in 2019.

Krishna Winston is the Marcus L. Taft Professor of German Language and Literature at Wesleyan University. She has translated more than thirty books, including five previous works by Peter Handke and works by Werner Herzog, Günter Grass, Christoph Hein, and Goethe.

“The artistry of Peter Handke's language may well be unsurpassed among contemporary writers in German. His prose is at once serpentine and spare, dreamlike and exacting. In his latest novel translated into English, Crossing the Sierra de Gredos, the Austrian author richly demonstrates his literary gifts, and the translator, Krishna Winston, sensitively renders the mesmerizing beauty of his style.” —Ross Benjamin, Bookforum

“A complex quest for meaning . . . Yeats called it ‘the fascination of what's difficult.' Nobody writing today surpasses Peter Handke at trying to make sense of it all.” —Kirkus

“Handke's power of observation and his seemingly casual tone, in which every word bears indispensable weight, are as mesmerizing as ever . . . A Handke tale invites active reading, speculation rather than passive absorption . . . It is [his] loving gaze, honed by time and discipline that shows readers the way out again into the world's prolific and astonishing strangeness.” —Kai Maristed, The New York Times Book Review on Peter Handke

“Numerous pleasures await the reader who delves into the fabric of Handke's prose . . . A subtle writer of unostentatious delicacy, Handke excels at fiction that, as it grows, coils around itself like wisteria . . . This is where the French New Novel might have gone if pushed.” —Paul West, Washington Post Book World on Peter Handke

All events will be held virtually until further notice.
END_OF_DOCUMENT_TOKEN_TO_BE_REPLACED