I Came As a Shadow: An Autobiography (Hardcover) 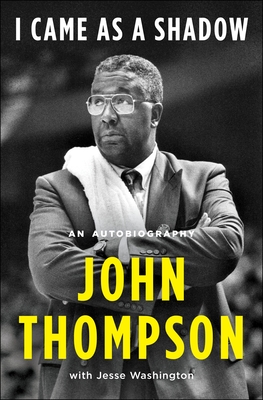 The long-awaited autobiography from Georgetown University’s legendary coach, whose life on and off the basketball court throws America’s unresolved struggle with racial justice into sharp relief

After three decades at the center of race and sports in America, the first Black head coach to win an NCAA championship is ready to make the private public. Chockful of stories and moving beyond mere stats (and what stats! three Final Fours, four times national coach of the year, seven Big East championships, 97 percent graduation rate), Thompson’s book drives us through his childhood under Jim Crow segregation to our current moment of racial reckoning. We experience riding shotgun with Celtics icon Red Auerbach, and coaching NBA Hall of Famers like Patrick Ewing and Allen Iverson. How did he inspire the phrase “Hoya Paranoia”? You’ll see. And thawing his historically glacial stare, Thompson brings us into his negotiation with a DC drug kingpin in his players’ orbit in the 1980s, as well as behind the scenes on the Nike board today.

Thompson’s mother was a teacher who couldn’t teach because she was Black. His father could not read or write, so the only way he could identify different cements at the factory where he worked was to taste them. Their son grew up to be a man with his own life-sized statue in a building that bears his family’s name on a campus once kept afloat by the selling of 272 enslaved people. This is a great American story, and John Thompson’s experience sheds light on many of the issues roiling our nation. In these pages, he proves himself to be the elder statesman college basketball and the country need to hear from now.

I Came As A Shadow is not a swan song, but a bullhorn blast from one of America’s most prominent sons.

John Thompson was the head basketball coach at Georgetown University from 1972 to 1999, where he won the NCAA championship in 1984. He was inducted into the Basketball Hall of Fame in 1999. He was a graduate of Providence College and held a master’s degree in guidance and counseling from the University of the District of Columbia. He completed I Came As a Shadow shortly before his death in the summer of 2020.

Jesse Washington is a writer for ESPN’s The Undefeated and was previously the national writer on race and ethnicity at the Associated Press, managing editor of Vibe, and editor-in-chief of Blaze.

“This superb book ... has been eagerly awaited for years. ... Thompson stresses the racial undercurrent that ran through his and Georgetown’s performances on the court.”
—Washington Post

“Reminds me of The Autobiography of Malcolm X. A Black man of stature, intelligence, and notoriety tells of his life in the United States. Thompson’s book, written with Jesse Washington, comments on slavery, racism, money in college sports, and education. And, as his mother, Anna, taught him as a boy, Thompson always speaks his mind.”
—The Progressive

“In August, I offered NPR listeners an appetizer at the end of John Thompson’s life. I Came As a Shadow is the full meal. What drives you forward as a reader are the experiences. The moments you’d heard about and the ones you had not; the private thoughts of a public man; the complexity of a Black man who both raged against society’s racial injustice and eagerly embraced the opportunities to make things better; and the opinions of a person who remained relevant to the end of his life.”
—NPR

“A story of hard-won mobility and triumph. … Just like its subject, I Came As a Shadow is smart, plainspoken, and principled.”
—ESPN's The Undefeated

"Every chapter will bring back a lot of great basketball memories from Thompson’s coaching days along with his playing career, his family ties, the people who inspired him and others. Washington pens a brilliant note as the co-author."
—Philadelphia Tribune

"A readable sports memoir; more importantly, a strong contribution to the ongoing discussion on race and racism."
—Kirkus

“Coach Thompson changed my life, not through basketball but with his teachings on education and manhood. He also changed our country and the way America sees itself. He was a great coach but an even better person, and his life story has lessons for us all.”
—Patrick Ewing

“Coach Thompson was bigger than the game of basketball. He used his position as a leader and one of the greats of coaching to stand up for what he knew was right. I had great respect for him, as a coach and as a man. He was one of a kind and his impact will be felt for years to come.”
—Michael Jordan

“I knew John Thompson for forty years. I loved the man. He was not only a great basketball coach, but an outstanding member of Nike’s Board of Directors for thirty years. His contributions came not just from his sports knowledge but more importantly from his overall wisdom. His passing leaves a large void in the life of Nike and me.”
—Phil Knight

“I Came As a Shadow is pure John Thompson—direct, honest, and uncompromising. It's the story of how his large life unfolded amidst our nation's ongoing struggle to deal honestly with race. John saw himself first and foremost as a teacher. The lessons he leaves behind with this, his final gift to us, are more important than ever.”
—President Bill Clinton

“No one had a larger impact on college basketball. John built a program at Georgetown that was second to none. He was an incredibly strong person who always put his players first and fought for them at every turn. Repeatedly, I was amazed at his passion for doing what is right, even when unpopular and no one was looking…. John was a one-of-a-kind leader and an absolute treasure.”
—Mike Krzyzewski

“Thanks for saving my life, Coach.”
—Allen Iverson

Events may be virtual or in person. Please see details for each event.
END_OF_DOCUMENT_TOKEN_TO_BE_REPLACED