Forget You Know Me: A Novel (Paperback) 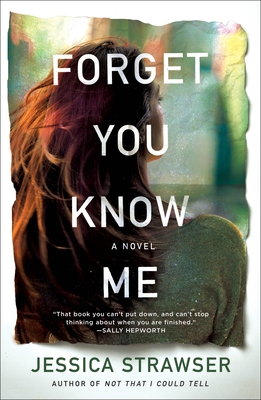 "Gorgeously written, suspenseful and full of characters who feel like old friends. I loved this book and didn't want it to end." — Michele Campbell, author of It’s Always the Husband

“Forget You Know Me is that book you can’t put down, and can’t stop thinking about when you are finished.” —Sally Hepworth, USA Today bestselling author of The Family Next Door

"A fantastic, tautly-paced novel that will have you racing to unravel its many questions and half-truths." —Liz Fenton & Lisa Steinke, bestselling authors of Girls' Night Out

"Friendships crack, marriages erode, and dangerous deceits rise to the surface in this twisty, emotionally complex, powder keg of a tale." —Emily Carpenter, bestselling author of Burying the Honeysuckle Girls and Every Single Secret

"[A] great hybrid of women's fiction and suspense...strong character development and unpredictable plot." - Library Journal on Forget You Know Me

“Not That I Could Tell is a psychological thriller of the highest order, as well written as it is structured. That means the magazine Strawser once edited might well be covering her from the other side, and deservedly so.”—Providence Journal

"Full of slow-burning intrigue, Strawser's second novel will appeal to fans of Liane Moriarty's Big Little Lies and Jennifer Kitses' Small Hours." — Booklist on Not That I Could Tell

"[An] engrossing, taut tale." -- Publisher's Weekly on Not That I Could Tell

"The characters are unique, engaging, and relatable and the ending is both surprising and poignant. Fans of Liane Moriarty will adore Jessica Strawser; she’s a huge talent!" —Kate Moretti, New York Times bestselling author of THE BLACKBIRD SEASON on Not That I Could Tell

"Fans of smart women's fiction mixed with a fast-paced plot should not miss this startling first novel." —Library Journal on Almost Missed You

"Almost Missed You is a skillful, insightful debut: a deft exploration of the mysteries of marriage, the price we pay for our secrets, and just how easy it is to make the worst choices imaginable." — Chris Bohjalian, New York Times bestselling author of The Sandcastle Girls and Midwives

“An emotional powerhouse of a novel…Strawser’s tale of guilt, blame, redemption, and forgiveness is a must read for anyone who enjoys a well-told, compelling exploration of the human heart.” —Garth Stein New York Times bestselling author of A Sudden Light and The Art of Racing in the Rain on Almost Missed You

"Almost Missed You is the sensational debut novel by the gifted Jessica Strawser who has expertly woven a tale of a marriage in crisis with elements of daring, danger, mystery and secrets that will surprise and delight you. This is a rich read which will keep you turning pages long into the night. Glorious!" — Adriana Trigiani, New York Times bestselling author of All the Stars in the Heavens

All events will be held virtually until further notice.
END_OF_DOCUMENT_TOKEN_TO_BE_REPLACED