Zoey Punches the Future in the Dick: A Novel (Zoey Ashe #2) (Hardcover) 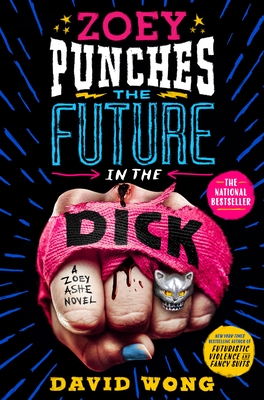 This is book number 2 in the Zoey Ashe series.

In the futuristic city of Tabula Ra$a, Zoey Ashe is like a fish so far out of water that it has achieved orbit. After inheriting a criminal empire, the twenty-three year-old finds herself under threat from all sides as a rogue's gallery of larger-than-life enemies think they smell weakness.

On the eve of the world's most lavish and ridiculous Halloween celebration, a steamer trunk-sized box arrives at Zoey's door and she is shocked to find that it contains a disemboweled corpse. She is even more shocked when that corpse, controlled by an unknown party, rises and goes on a rampage through the house. Speaking in an electronic voice, it publicly accuses Zoey of being its murderer. This is the kind of thing that almost never happened at her old job.


The city was already a ticking time bomb of publicity-hungry vigilantes with superhuman enhancements and Zoey knows this turn of events is unlikely to improve the situation. Now, she and her team of high-tech tricksters have to solve this bizarre murder while simultaneously keeping Tabula Ra$a from descending into chaos.

“Biting humor and blatant digs at modern society overlay a subtly brilliant and thoughtful plot” (Publishers Weekly) in John Dies at the End author David Wong’s first installment of the Zoey Ashe Series, Futuristic Violence and Fancy Suits. Now, “one of today’s great satirists” (Nerdist) is back with Zoey Punches the Future in the Dick, the second installment in a “Technicolor tomorrowland.” (Kirkus Reviews)

DAVID WONG is the pseudonym of Jason Pargin, New York Times bestselling author of the John Dies at the End series as well as the award-winning first book in the Zoey Ashe series, Futuristic Violence and Fancy Suits. His essays at Cracked.com have been read by tens of millions of people around the world.

Praise for ZOEY PUNCHES THE FUTURE IN THE DICK:

"[Zoey Punches the Future] is at its best when Wong explores the nature of wealth and power. In the character of Zoey, Wong pushes against the fairy-tale cliché where the downtrodden (through supernatural means or otherwise) are rewarded a life of carefree prosperity." —Locus Magazine

"The future is simultaneously familiar and utterly ridiculous in Zoey Punches the Future in the Dick, the second Zoey Ashe thriller from David Wong...a funhouse mirror of modern society viewed through a superhero comic or a James Bond movie...rich with commentary on celebrity culture, social media and toxic masculinity, readers will be laughing too hard for it to ever feel preachy." —Shelf Awareness (starred review)

"Wong sneaks a nuanced examination of the surrealist nature of the digital age into the nonstop action, whipping technological, philosophical, and ethical questions into a wild romp that satirizes everything from the men’s rights movement to gaming culture to the cult of celebrity. This is a brilliant modern parable disguised as pop fiction." —Publishers Weekly

"Wong's trademark imagination and humor remain but it's his grounded sense of humanity that elevates this work." —Booklist

"With verve and velocity, the story moves...one cinematic set piece after another, strung together with twisty fun and wit." —The New York Times Book Review

"Like Jonathan Swift for the internet age, Wong’s novel offers an engrossing journey and razor-sharp wit inside of an uncanny prediction of an American future. His newest is only more proof that he will be remembered as one of today’s great satirists." —Nerdist

"All right, grab some popcorn and strap in. We're in for another profane and funny roller-coaster ride from Wong."
—Kirkus Reviews

"Wong unabashedly trolls everyone and lampoons everything in this beautifully outrageous science fiction adventure...Biting humor and blatant digs at modern society overlay a subtly brilliant and thoughtful plot focused on one young woman’s growth and survival against all odds." —Publishers Weekly, starred review

"A sofa clutching read from beginning to end, and a great look at the constantly growing world of social networking." —Starbust, 9 out of 10 stars

All events will be held virtually until further notice.
END_OF_DOCUMENT_TOKEN_TO_BE_REPLACED