Ruthless Gods: A Novel (Something Dark and Holy #2) (Hardcover) 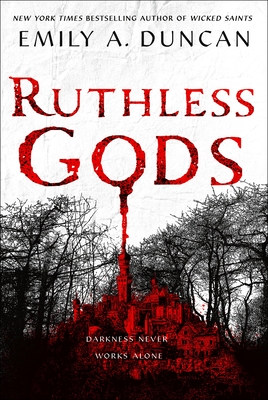 This is book number 2 in the Something Dark and Holy series.

“Wicked Saints was a tour de force, and Ruthless Gods takes up its mantle with no trace of second book syndrome or lagging energy. Emily Duncan’s carefully crafted sequel takes both familiar favorite characters and new faces from the Tranavian court to thrilling new locales — to mines and monasteries, into Kalyazi forests, and far away to the holy seat of the gods. This brilliant, brutal fever dream peopled with gods and eldritch things, limned with magic and horror, will leave readers breathless for the trilogy’s third installment.”
— Anna Bright, One More Page Books, Arlington, VA

Nadya doesn’t trust her magic anymore. Serefin is fighting off a voice in his head that doesn’t belong to him. Malachiasz is at war with who--and what--he’s become.

As their group is continually torn apart, the girl, the prince, and the monster find their fates irrevocably intertwined. Their paths are being orchestrated by someone…or something. The voices that Serefin hears in the darkness, the ones that Nadya believes are her gods, the ones that Malachiasz is desperate to meet—those voices want a stake in the world, and they refuse to stay quiet any longer.

In their dramatic follow-up to Wicked Saints, the first book in their Something Dark and Holy trilogy, Emily A. Duncan paints a Gothic, icy world where shadows whisper, and no one is who they seem, with a shocking ending that will leave you breathless.

EMILY A. DUNCAN is the New York Times bestselling author of Wicked Saints and Ruthless Gods. They work as a youth services librarian and received a Master’s degree in library science from Kent State University, which mostly taught them how to find obscure Slavic folklore texts through interlibrary loan systems. When not reading or writing, they enjoy playing copious amounts of video games and dungeons and dragons. They live in Ohio.

BOOKPAGE, "2020 preview: Most anticipated YA sequels and series titles"

BOOK RIOT, "The Ultimate Guide to Spring 2020 YA Books for Your TBR"

BOOKSTR, "Get Excited for These Spring Releases"

BUZZFEED, "30 LGBTQ YA Books You'll Absolutely Want To Pick Up This Spring"

HYPABLE, "15 Most Anticipated YA Fantasy Sequels of 2020"

NERDIST, "7 Queer Sci-Fi and Fantasy Books to Magic You Away"

POPSUGAR, "Books Coming Out In 2020 That Need to Be on Your TBR Now"

SHEREADS, "Most Anticipated YA Books of 2020"

SYFY.COM, "Six YA SFF Novels to Pick Up in April"

THE NERD DAILY, "The Most Anticipated 2020 Book Releases"

"... if you liked Wicked Saints and you want more of everything, the sequel Ruthless Gods takes the monstrous romance to whole new... heights. Get ready." - BOOK RIOT

"Ruthless Gods is every bit the sequel that Emily A. Duncan's chilling Wicked Saints deserves - even darker, bloodier and even more complicated...A dark, brutal and deeply thrilling sequel that will leave you wanting more." - CULTURESS

"Magic and romance steeped in blood and betrayal. ...fans of the first volume will be pleased to have more of the same, with higher stakes and increasingly complicated questions of power and divinity." - KIRKUS

BOOKRIOT, “20 YA Dark Fantasy Books For Your Winter TBR”

BUZZFEED, "29 YA Books You Absolutely Must Read This Spring"

EPIC READS, "The 16 Most Anticipated YA Books to Read in April"

SYFY, "6 April YA Novels That are Out of This World"

"If you like your young adult fantasy full of ice, blood, and angst, Wicked Saints will sweep you up in its wintery embrace." - NPR, "3 Young Adult Novels To Help You Out Of Hibernation"

All events will be held virtually until further notice.
END_OF_DOCUMENT_TOKEN_TO_BE_REPLACED