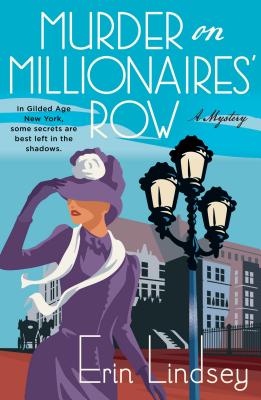 This is book number 1 in the A Rose Gallagher Mystery series.

"With a strong, likeable heroine and a well-drawn cast of characters, this highly recommended romp through late 19th-century New York will have readers clamoring for the next installment."—Library Journal (Starred)

Rose Gallagher might dream of bigger things, but she’s content enough with her life as a housemaid. After all, it’s not every girl from Five Points who gets to spend her days in a posh Fifth Avenue brownstone, even if only to sweep its floors. But all that changes on the day her boss, Mr. Thomas Wiltshire, disappears. Rose is certain Mr. Wiltshire is in trouble, but the police treat his disappearance as nothing more than the whims of a rich young man behaving badly. Meanwhile, the friend who reported him missing is suspiciously unhelpful. With nowhere left to turn, Rose takes it upon herself to find her handsome young employer.

The investigation takes her from the marble palaces of Fifth Avenue to the sordid streets of Five Points. When a ghostly apparition accosts her on the street, Rose begins to realize that the world around her isn’t at all as it seems—and her place in it is about to change forever.

ERIN LINDSEY has lived and worked in dozens of countries around the world, but has only ever called two places home: her native city of Calgary and her adopted hometown of New York. In addition to the Rose Gallagher mysteries, she is the author of the Bloodbound series of fantasy novels from Ace. She divides her time between Calgary and Brooklyn with her husband and a pair of half-domesticated cats.

“Murder on Millionaires’ Row is utterly charming, scrupulously researched, and beautifully felt. I enjoyed every page and cannot wait for Rose to stick her fingers into ever more perilous pies.” —Lyndsay Faye, bestselling author of Gods of Gotham and Jane Steele

“Sharp, insightful, and more than a little sassy, Rose Gallagher is a heroine to cheer for. Lovers of historical mysteries and all things supernatural will devour Murder on Millionaires’ Row and clamor for more.” —Tasha Alexander, New York Times bestselling author of Death in St. Petersburg

“A charming mystery of manners. Ghosts, murder, magic, and a heroine who's impulsive but also refreshingly smart about her choices. What's not to love?” —Mary Robinette Kowall, Hugo-award winning author of Shades of Milk and Honey

“With a strong, likable heroine and a well-drawn cast of characters, this highly recommended romp through late 19th-century New York will have readers clamoring for the next installment.” —Library Journal (Starred)

“Lindsey kicks off her new series with a spooky paranormal mystery/thriller filled with historical tidbits, a touch of romance, and a talented and delightfully gritty sleuth.” —Kirkus Reviews

“Rose, Thomas, and an NYPD detective join forces with various practitioners—a warlock, a medium, an apothecary, various witches—to thwart the apocalypse. The first in a projected series, this should win fans with its plucky protagonist, who defies expectations of her class and gender; genre-blending plot; brisk pace; and potential for romance.”—Booklist

“A mix of fantasy and history, the author has created an alternate Gilded Age New York filled with all sorts of new possibilities perfect for an intrepid Irish girl. ”—New York Public Library "30 Historical Mystery Series to Get You Through Any Crisis"

“A mystery thriller that will draw you into a world that is unlike any other. An engaging and fast-paced read that is full of adventure and mystery.”—Fresh Fiction

All events will be held virtually until further notice.
END_OF_DOCUMENT_TOKEN_TO_BE_REPLACED