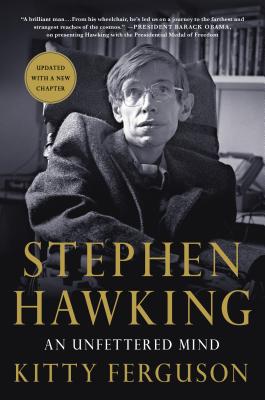 Kitty Ferguson, the award-winning and international bestselling author of Stephen Hawking’s biography, presents an even deeper portrait of the legendary physicist’s life and scientific theories.

This updated edition of Stephen Hawking: An Unfettered Mind looks at one of the most remarkable figures of our age: the bestselling author of A Brief History of Time, celebrated theoretical physicist, and an inspiration to millions around the world. Ferguson offers fresh insights into the way Hawking thinks and works, his ever-more-imaginative adventures in science at the “flaming ramparts of the world,” the discovery of gravity waves, the blockbuster proposal for “Starshot” to explore the cosmos, and his powerful use of his celebrity on behalf of human rights and survival on earth and beyond.

With rare access to Hawking, including childhood photos and in-depth research, Ferguson creates a rich and comprehensive picture of his life: his childhood; the heartbreaking ALS diagnosis when he was a first-year graduate student; his long personal battle for survival in pursuit of a scientific understanding of the universe; and his rise to international fame. She also uses her gift for translating the language of theoretical physics into the language of the rest of us to make Hawking’s scientific work accessible.

Kitty Ferguson has been writing and lecturing about science and scientists for over two decades, making the language and concepts of physics and cosmology understandable for audiences without a scientific background.  Her 1991 biography of Stephen Hawking, written with his encouragement and help, was an international best-seller.  She was a consultant for Hawking’s book The Universe in a Nutshell.  Kitty is the author of seven books including The Fire in the Equations and The Music of Pythagoras.  She has also been interviewed by Forbes Magazine, PBS, “News Hour with Jim Lehrer,” and the BBC.  She lectures widely in North America, and her appearances have included the Goddard Space Flight Center, the Hayden Planetarium in NYC, The Nobel Peace Prize Forum, and many universities.  Kitty and her husband divide their time between Cambridge, England and South Carolina.

“Ferguson shines at explaining Hawking's theories, the jovially competitive academic world in which they are hammered out and her subject's distinctive and evolving intellectual style…An irresistible story. His puckish humor and exuberance for life and for ideas are infectious even at a remove. And the ideas themselves could not ask for a better elucidator.” —Laura Miller, Salon

“Intelligent and readable . . . Kitty Ferguson is astonishing in her own right . . . She is a careful explicator not only of [Hawkings'] ideas but of the context in which they arose.” —Sara Lippincott, The Los Angeles Times

“Ferguson provides engaging and helpful explanations of the physics behind [Hawking's] triumphs.” —The Washington Post

“Ferguson's biography of this remarkable man, who recently marked his 70th birthday, is based on personal interviews and a sound understanding of the physics behind Hawking's ideas...this is a delightful book...Highly recommended.” —Choice

“Ferguson replaces the iconic but static image of cosmologist Hawking with flesh and blood in this vivid portrait… Through interviews with Hawking and his colleagues, friends, and family, Ferguson builds a complete picture of Hawking's life, from his tireless work to explain our universe to his notorious driving, playful appearances on Star Trek, The Simpsons, and other shows, campaigning to improve the lives of the disabled, and his family life, with special attention to his relationship with his first wife, Jane, whose sacrifices allowed him to focus on his work. In the end, Ferguson captures the very full life and work of one of the most vibrant minds of our time.” —Publishers Weekly, starred review

“Ferguson brilliantly updates her 1991 children's biography of Stephen Hawking for an adult audience . . . Her ability to write clearly about scientific issues using metaphor rather than mathematics makes this an excellent introduction to astrophysics for the interested layman. A fascinating portrait of a complex figure who ponders the place of man and God in the universe and who still loves the 'Eureka moment of discovering something that no one knew before.'” —Kirkus Reviews

“Kitty Ferguson gives a thorough account of Hawking the man, as well as of his extraordinary body of work in cosmology. [She has] a flair for the original which makes much of the tome highly readable. There are excellently clear descriptions of the large issues and precious few off-putting mathematics and equations...Ferguson pitches the balance between Hawking's personal life and an explanation of his work about right.” —Greg Jamison, Entertainment Focus

“As both a global icon and an innovative theoretical physicist, Stephen Hawking is well served by science writer Kitty Ferguson's fascinating biography. Ferguson explains in accessible terms the major themes that Hawking has explored in his career, and creates a portrait of the pri­vate man by drawing on her close personal contact with him and his family. ... Ferguson's sympathetic and informed take on an individual who has enriched human knowledge against the odds is an excellent summing-up, as Hawking approaches his 70th birthday, of his unique and creative contribution to both science and humanity.” —George Ellis, Nature

“More than a biography … a brave attempt to chart the life of the celebrated physicist in parallel with his astounding and important work…. Ferguson has spent a lot of time with Hawking and as a scientist she attempts to explain in lay terms the fundamental concepts of Hawking's vast and amazing body of work.” —Bertrams

“Science writer Kitty Ferguson has been working for over 20 years to reveal the real Stephen Hawking to the world… Beyond explaining his scientific achievements, Ferguson brings us closer to the man who plays hide-and-seek with his young son, endures marital discord, has a sign on his office door that reads "Quiet Please, The Boss is Asleep," and kibitzes with a journalist who asked if he has willed his DNA to science: "I don't think anyone would want another copy of me." Ultimately, the most astonishing aspect of Ferguson's Hawking is not his otherness, but the extraordinary things that one determined individual can accomplish once he realizes that "life is worth living.” —Harold Heft, The Montreal Gazette

All events will be held virtually until further notice.
END_OF_DOCUMENT_TOKEN_TO_BE_REPLACED