Only Ever You: A Novel (Hardcover) 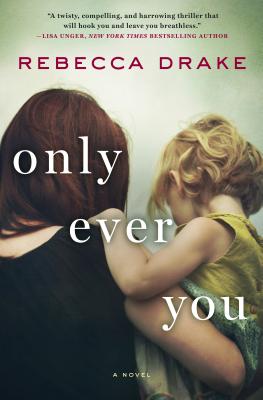 "Suspense at its best." - Lisa Scottoline

A gripping, edge-of-your-seat domestic thriller, Rebecca Drake's Only Ever You will leave you breathless as you race to the end.

Jill Lassiter’s three-year-old daughter disappears from a playground only to return after forty frantic minutes of searching, but the mother’s relief is short-lived–there’s a tiny puncture mark on Sophia’s arm. When doctors can find no trace of drugs in Sophia’s system, Jill accepts she’ll never know what happened, but at least her child is safe.

Except Sophia isn’t. Someone is watching the Lassiter home in an affluent Pennsylvania suburb, infiltrating the family’s personal and professional lives.

As Jill faces every parent’s worst nightmare a second time, she must find out who has taken her daughter and why. Someone doesn’t just want Sophia for her own—she’s out to destroy Jill’s entire family.

REBECCA DRAKE is the author of the novels Don't Be Afraid, The Next Killing, The Dead Place, which was an IMBA bestseller, and Only Ever You, as well as the short story "Loaded," which was featured in Pittsburgh Noir. A former journalist and native New Yorker, Rebecca currently lives in Pittsburgh, PA, with her husband and two children.

"Just Between Us winds its roller-coaster plot around our tendency to see exactly what we are looking for—while our little lies take on dangerous lives of their own." -- Oprah.com

"Female friendships flourish, then falter, under the weight of chance events underlaid by secrecy and deceit [...] Drake shows a sure hand in spinning suburban thrillers." —Booklist

"Rebecca Drake's Just Between Us is suspense at its best--a riveting, fast-paced psychological thriller that brilliantly explores the limits of friendship and the secrets we keep from one another." — New York Times bestselling author Lisa Scottoline

"Fans of Liane Moriarty and B.A. Paris are going to love this twisty, diabolical suburban thriller. Clear your evening, you won't be able to put it down." — J.T. Ellison, New York Times bestselling author of Lie to Me

"Rebecca Drake's Just Between Us is a stunner - a tense, twisty thriller about four ordinary women that begs the question: When a friend is in trouble, and all you want to do is help, how can everything go so terribly wrong?" — Karen Dionne, author The Marsh King's Daughter

"Rebecca Drake's Just Between Us is a riveting thriller that reveals the dark heart beating in the middle of American suburbia. Every character in this rich novel has a secret, and the secrets get deeper and darker as the pitch-perfect plot unfolds. This is a stunning story of friendship and the tangled lies that bind four women together. Don't miss it!" — David Bell, author of Bring Her Home