The Revenant: A Novel of Revenge (Hardcover) 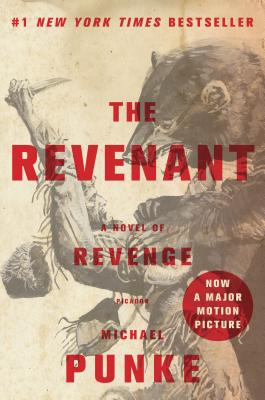 A thrilling tale of betrayal and revenge set against the nineteenth-century American frontier, the astonishing story of real-life trapper and frontiersman Hugh Glass

The year is 1823, and the trappers of the Rocky Mountain Fur Company live a brutal frontier life. Hugh Glass is among the company’s finest men, an experienced frontiersman and an expert tracker. But when a scouting mission puts him face-to-face with a grizzly bear, he is viciously mauled and not expected to survive. Two company men are dispatched to stay behind and tend to Glass before he dies. When the men abandon him instead, Glass is driven to survive by one desire: revenge. With shocking grit and determination, Glass sets out, crawling at first, across hundreds of miles of uncharted American frontier. Based on a true story, The Revenant is a remarkable tale of obsession, the human will stretched to its limits, and the lengths that one man will go to for retribution.

Michael Punke serves as the U.S. Ambassador to the World Trade Organization in Geneva, Switzerland. He has also served on the White House National Security Council staff and on Capitol Hill. He was formerly the history correspondent for Montana Quarterly, and an adjunct professor at the University of Montana. He is the author of Fire and Brimstone: The North Butte Mine Disaster of 1917, and Last Stand: George Bird Grinnell, the Battle to Save the Buffalo, and the Birth of the New West. His family home is in Montana.

“The makings of a western classic, Michael Punke's novel The Revenant provides muscle and sinew to the vengeful and epic tale of mountain man, Hugh Glass that even a sow Grizzly couldn't rend asunder.” —Craig Johnson, author of the Walt Longmire novels

“A superb revenge story . . . Punke has added considerably to our understanding of human endurance and of the men who pushed west in the footsteps of Lewis and Clark--a significant feat.” —The Washington Post Book World

“A captivating tale of a singular individual . . . Authenticity is exactly what The Revenant provides, in abundance.” —The Denver Post

“One of the great tales of the nineteenth-century West.” —The Salt Lake Tribune

“A gripping and hard-edged tale of survival, revenge, and, ultimately, redemption….Loosely based on true events, Glass's harrowing journey will keep readers engaged throughout. A must-read for fans of Westerns and frontier fiction and recommended for anyone interested in stories that test the limit of how much the human body and spirit can endure.” —Library Journal