A Clue to the Exit: A Novel (Paperback) 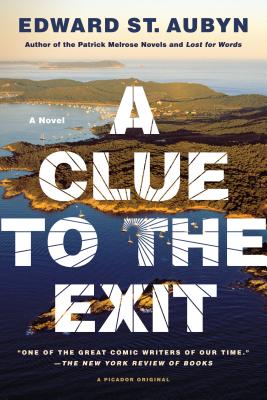 A beautifully modulated novel that shows Edward St. Aubyn at his sparkling best

Charlie Fairburn, successful screenwriter, ex-husband, and absent father, has been given six months to live. He resolves to stake half his fortune on a couple of turns of the roulette wheel and, to his agent's disgust, to write a novel-about death. In the casino he meets his muse. Charlie grows as addicted to writing fiction as she is to gambling.

His novel is set on a train and involves a group of characters (familiar to readers of St. Aubyn's earlier work) who are locked in a debate about the nature of consciousness. As this train gets stuck at Didcot, and Charlie gets more passionately entangled with the dangerous Angelique, A Clue to the Exit comes to its startling climax. Exquisitely crafted, witty, and thoughtful, Edward St. Aubyn's dazzling novel probes the very heart of being.

Edward St. Aubyn was born in London. His acclaimed Patrick Melrose novels are Never Mind, Bad News, Some Hope, Mother's Milk (winner of the Prix Femina étranger and short-listed for the Man Booker Prize), and At Last. The series was made into a BAFTA Award–winning Sky Atlantic TV series starring Benedict Cumberbatch. St. Aubyn is also the author of A Clue to the Exit, On the Edge (short-listed for the Guardian Fiction Prize), Lost for Words (winner of the Bollinger Everyman Wodehouse Prize), and Dunbar, his reimagining of King Lear for the Hogarth Shakespeare project.

“One of the great comic writers of our time.” —The New York Times Review of Books

“Perhaps the most brilliant English novelist of his generation.” —Alan Hollinghurst

“One of the preeminent writers of his generation.” —Will Self

“One of the great prose stylists in England” —Alice Sebold, author of The Lovely Bones

All events will be held virtually until further notice.
END_OF_DOCUMENT_TOKEN_TO_BE_REPLACED