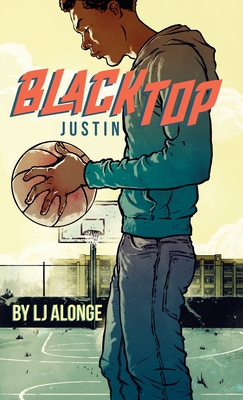 This is book number 1 in the Blacktop series.

An action-packed basketball series from author LJ Alonge set on the courts of Oakland, CA.

Justin has a list of goals stashed under his mattress. Number 1 is "figure out life plans." Number 5 is "earn Zen Master rating in WoW." Nowhere on that list is "play the crew from Ghosttown," but that's the type of trouble that always seems to finds him.

The debut title from LJ Alonge's new basketball series pulses with action on and off the court. With wit, humor, and honesty, Justin unfolds over one hot summer.

LJ Alonge has played pick-up basketball in Oakland, Los Angeles, New York, Kenya, South Africa and Australia. Basketball's always helped him learn about his community, settle conflicts, and make friends from all walks of life. He's never intimidated by the guy wearing a headband and arm sleeve; those guys usually aren't very good. As a kid, he dreamed of dunking from the free throw line. Now, his favorite thing to do is make bank shots. Don't forget to call "bank!"

"A winning combination of interest and approachability. Debut author Alonge writes with nimbleness and insight, and Justin’s narration is leavened with shrewd, rueful observations and quick turns of phrase." (Bulletin of the Center for Children's Books, *STARRED REVIEW*)

“The brief novel is both a satisfying basketball story and an African-American boy's first-person account of finding his way in the world... debut author Alonge plays the game just right.” (Kirkus Reviews)

“A coming-of-age story with hard edges and heart.” (Publisher’s Weekly)

All events will be held virtually until further notice.
END_OF_DOCUMENT_TOKEN_TO_BE_REPLACED