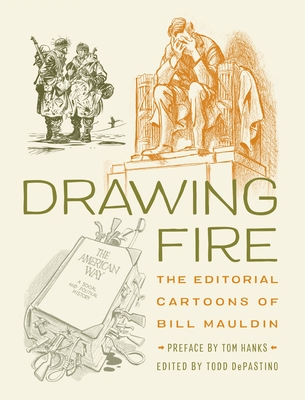 By Todd Depastino, Tom Hanks (Preface by)
$35.00
On Our Shelves Now

The first career-spanning volume of the work of two-time Pulitzer Prize-winning cartoonist Bill Mauldin, featuring comic art from World War II, Korea, Vietnam and Operation Desert Storm, along with a half-century of graphic commentary on civil rights, free speech, the Cold War, and other issues.

Army sergeant William Henry "Bill" Mauldin shot to fame during World War II with "Willie & Joe" cartoons, which gave readers of Stars & Stripes and hundreds of home-front newspapers a glimpse of the war from the foxholes of Europe.

Lesser known are Mauldin's second and even third acts as one of America's premier political cartoonists from the last half of the twentieth century, when he traveled to Korea and Vietnam; Israel and Saudi Arabia; Oxford, Mississippi, and Washington, DC; covering war and peace, civil rights and the Great Society, Nixon and the Middle East. He especially kept close track of American military power, its use and abuse, and the men and women who served in uniform.

Now, for the first time, his entire career is explored in this illustrated single volume, featuring selections from Chicago's Pritzker Military Museum & Library.

Bill Mauldin was a two-time Pulitzer Prize winning cartoonist. His famous characters of Willie and Joe tracked the bootsteps of America's GIs in Europe, drawn from Mauldin's own experiences as a rifleman in the 45th Infantry Division during the Second World War. After the war, Mauldin returned to civilian life and cast his critical eye and sharp humor on battles back home over McCarthyism, civil rights, free speech, and ensuing wars. In addition to several books, Mauldin published essays and drawings that appeared in such magazines as Life, Sports Illustrated, and the Saturday Evening Post before turning to daily political cartooning at the St. Louis Post-Dispatch and the Chicago Sun-Times, where he retired in 1991. Bill Mauldin died in 2003 and is buried at Arlington National Cemetery. Todd DePastino (Editor) is the author of Bill Mauldin: A Life Up Front and editor of the cartoon collections Willie & Joe: The WWII Years and Willie and Joe: Back Home. He currently serves as Executive Director of the Veteran's Breakfast Club, a 501(c)(3) non-profit dedicated to sharing veterans' stories with the public.

All events will be held virtually until further notice.
END_OF_DOCUMENT_TOKEN_TO_BE_REPLACED