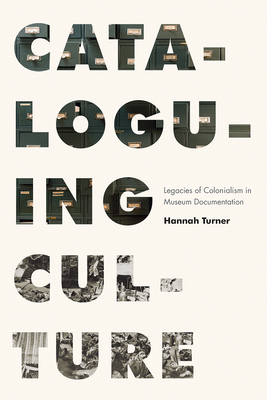 By Hannah Turner
Email or call for price.
Hard to Find

How does material culture become data? Why does this matter, and for whom? As the cultures of indigenous peoples in North America were mined for scientific knowledge, years of organizing, classifying, and cataloguing hardened into accepted categories, naming conventions, and tribal affiliations--much of it wrong.

Cataloguing Culture examines how colonialism operates in museum bureaucracies. Using the Smithsonian’s National Museum of Natural History as her reference, Hannah Turner organizes her study by the technologies framing museum work over 200 years: field records, the ledger, the card catalogue, the punch card, and eventually the database. She examines how categories were applied to ethnographic material culture and became routine throughout federal collecting institutions. As indigenous communities encounter the documentary traces of imperialism while attempting to reclaim what is theirs, this timely work shines a light on the ongoing colonization of this cultural heritage in the archive.

Hannah Turner is an information and museum studies scholar, and is an assistant professor in the School of Information at the University of British Columbia. She has published in journals such as Museum Anthropology, Knowledge Organization, and Cataloging and Classification Quarterly. From 2018 to 2019 she was a lecturer in museum studies at the University of Leicester.

All events will be held virtually until further notice.
END_OF_DOCUMENT_TOKEN_TO_BE_REPLACED