In the Garden of Beasts (Paperback) 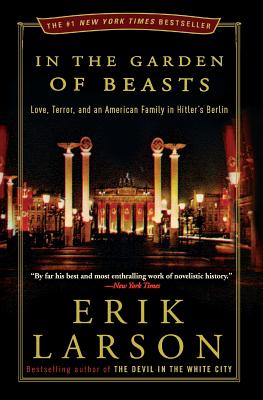 By Erik Larson
Email or call for price.
Backordered

“What would it have been like to live in Berlin during the first year of Hitler's reign? Larson's answer is as haunting as anything he has ever written. The narrative focuses on William Dodd, a mild-mannered scholar who was appointed U.S. ambassador to Germany in 1933. Adolph Hitler had been chancellor for a mere six months. Over the ensuing year, Dodd and his family members saw their hope and sense of promise turn into horror and revulsion as Germany rapidly descended into a pit of violence and fear. In the Garden of Beasts is a surprising, informative plea to heed the lessons of history.”
— Christopher Rose, Andover Bookstore, Andover, MA

“Larson once again tells the story of real people living through momentous, historic events. In 1933, William Dodds becomes America's ambassador to Germany, a year after Adolf Hitler was named chancellor of Germany. Dodds brings his family with him to Berlin, including his daughter, Martha, a vivacious socialite. The U.S. State Department shows more concern about reconciliation with Germany in hopes of debt repayment than in the increasing signs that Hitler is stepping up violence against Jews and building up his military capabilities. With the Dodds family, you will be right in the middle of the events that led up to WWII.”
— Jeanne Costello, Maria's Bookshop, Durango, CO

All events will be held virtually until further notice.
END_OF_DOCUMENT_TOKEN_TO_BE_REPLACED