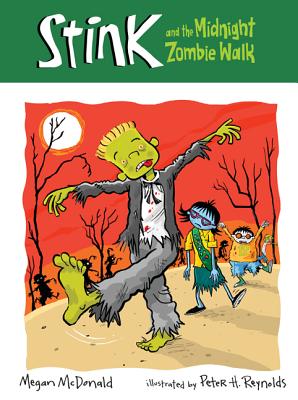 Reading is UNdead — and everyone has zombies on the brain — as Stink's school and a local bookstore cook up a frightfully fun Main Street event.

Guts! Brains! Eyeballs! There’s only one week before the new book in the Nightmare on Zombie Street series comes out. Of corpse Stink will be first in line at the Blue Frog Bookstore to buy his copy and join the town’s Midnight Zombie Walk! Until then, Stink and his friends keep busy making ketchup-stained zombie costumes, trying to raise money to buy the book, and racking up points for Virginia Dare School’s race to one million minutes of reading. But with all that talk about the undead, Zink
— that is, Stink — starts to wonder: is he being hunted by zombies? He does have a very delicious — er, superb — brain, after all. Readers will just have to open ze book and zee! Mwa-ha-ha-ha!

Megan McDonald is the creator of the popular and award-winning Stink and Judy Moody series. She is also the author of three Sisters Club stories, "Ant and Honey Bee: A Pair of Friends at Halloween," and many other books for children. She lives in Sebastopol, California.

Peter H. Reynolds is the illustrator of the Stink and Judy Moody books and the author-illustrator of "The Dot," " Ish," "So Few of Me," and "Rose's Garden." He lives in Dedham, Massachusetts.

An all-zombie-all-the-time zombiefest, featuring a bunch of grade-school kids, including protagonist Stink and his happy comrades… McDonald's feel-good tone is deeply encouraging for readers to get up and do this for themselves because it looks like so much darned fun.
—Kirkus Reviews

Gross, creepy, and hilarious, the latest simple chapter book about the young, mischievous grade-schooler Stink has even parents, teachers, and other grown-ups joining in the nonsense as they all celebrate the joy of reading... Kids will love the gruesome wordplay, and the digital artwork extends the uproar with spooky shadows like giant cobwebs and body parts, while zombies in school uniforms lurch down Main Street. Perfect for Halloween, this will make fun reading all year round.
—Booklist

All events will be held virtually until further notice.
END_OF_DOCUMENT_TOKEN_TO_BE_REPLACED