How to Be Golden: Lessons We Can Learn from Betty White (Hardcover) 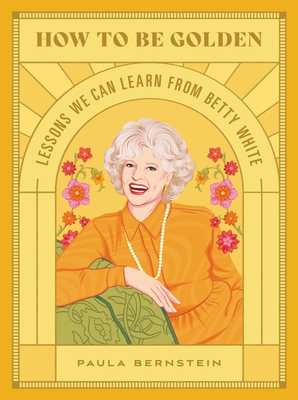 If there's one thing the nation can agree on--we all love Betty White! This spirited homage to Betty captures her unique humor, timeless wisdom, and impish irreverence that's made her one of America's longest lasting and most beloved stars.

An unparalleled American icon, Betty White started show business in 1939 in radio and was a pioneer in the early days of TV. Over eight decades, she's appeared on countless sitcoms, game shows, and talk shows, including the iconic comedy hits The Mary Tyler Moore Show and The Golden Girls. Her accolades over the years include two Emmy nominations, a Grammy, and induction into the Television Academy Hall of Fame, while she had her best decade yet as a nonagenarian: becoming the oldest person to host SNL, starring in a Super Bowl ad, and winning praise with her popular supporting role in Hot in Cleveland. Through it all, her "don't take yourself too seriously" attitude appeals to legions of fans, spanning all generations.

How to Be Golden recounts her engaging life story while weaving in her words of wisdom and insight about love, friendship, work, family, sex, acting, aging, beauty, and more.

Paula Bernstein is a journalist who regularly contributes to Fortune Magazine, where she reports on the entertainment business. She has held positions at Indie Wire, Variety, and The Hollywood Reporter, where she reported on television business news, and her work has appeared in Fast Company, TV Guide, The New York Times, Adweek and many other publications. She is also the author of Love is All Around: And Other Lessons We've Learned from The Mary Tyler Moore Show and Identical Strangers: A Memoir of Twins Separated and Reunited. Visit her at paulabernstein.com

With How to Be Golden, Paula Bernstein has crafted the perfect tribute to an American icon. In a format that parses through the entire century of Betty's life and career, this lively book informs us about her incredible past, and provides life lessons that we, too, can use to Betty-er ourselves.—Jim Colucci, author of "Golden Girls Forever: An Unauthorized Look Behind the Lanai"

The world doesn't deserve Betty White, but thankfully, she shares her wisdom, humor and compassion with us all. Paula Bernstein's joyful book brims with priceless life lessons from an unconventional woman who blazed trails while marching to her own beat. Indeed, we should all ask ourselves: What would Betty do?—Erin Carlson, author of "Queen Meryl" and "I'll Have What She's Having"

What a fun tribute to an American icon! Paula's book is insightful, and funny, just like the incomparable Betty White herself!—Alexi Pappas, Olympic Runner and author of "Bravey"

It’s obvious that we could all learn a thing or ten from the incredible Betty White. Thankfully, the funny and delightful Paula Bernstein has compiled a whole book of gorgeous lessons gleaned from the life of this spectacular talent. Get this book ASAP and buy an extra copy for your favorite person. Betty’s wisdom is universal. —Sara Benincasa, author of “Real Artists Have Day Jobs” and “Agorafabulous!”

I had no idea that the same woman who often played sweet, naive characters on TV was actually a brave feminist trailblazer in real life. This fun book captures Betty's positive outlook on life, and explains the reason she continues to be such an icon.—Melissa Maerz, author of "Alright, Alright, Alright: The Oral History of Richard Linklater's Dazed and Confused"

How to Be Golden is as delightful as its subject matter, Betty White. Even as a lifelong student of Betty, I learned a lot, and was inspired along the way by her life so fully lived—Jennifer Keishin Armstrong, New York Times bestselling author of “Seinfeldia,” “Mary and Lou and Rhoda and Ted,” and “When Women Invented Television”

Anyone who grew up watching Betty White on The Mary Tyler Moore Show or Hot in Cleveland or, of course, The Golden Girls, knows her ageless energy, beauty, sweet demeanor and bawdy humor. This book makes it clear her pioneering ways in the world of television and in the characters she plays are no joke –her humor, resilience, and refusal to live up to tired stereotypes at all stages of her career prove her to be an inspirational role model for all of us.—Lauren Marino, author of “What Would Dolly Do?” and “Bookish Broads”

If you’re looking for a new spiritual guide, have you considered Betty White, patron saint of common sense and double entendres? Let Paula Bernstein initiate you into the mysteries of all things Betty. —Gavin Edwards, New York Times bestselling author of “The Tao of Bill Murray"

In a winning combination of genres, Paula Bernstein fuses biography, trivia, and life lessons to tell the story of Betty White— just when we need White's advice, wisdom, and sunny outlook the most! The life she’s led can inspire us all.—Kate Aurthur, Editor-at-Large, Variety

Everyone loves Betty White and after reading Paula Bernstein's How to Be Golden it'd be impossible not to absolutely idolize the sitcom star. Bernstein's tome is a lovely and sweet blend of biography and advice where Betty's voice is loud and clear. One of the quintessential stars of any age shines through in a loving story you'll want to return to as you navigate life. A definite golden joy on its own! —Kristen Lopez, IndieWire TV Editor

Paula Bernstein’s ‘How to Be Golden’ isn’t simply a biography of film and television icon Betty White; full of surprising trivia, fun quizzes, behind the scenes stories and more, it's a tribute to one of Hollywood’s most beloved and resilient comedians of all time.—Erik Anderson, AwardsWatch

All events will be held virtually until further notice.
END_OF_DOCUMENT_TOKEN_TO_BE_REPLACED