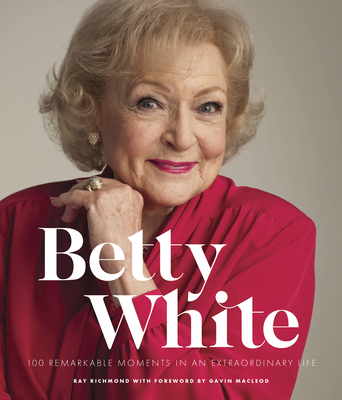 This visual salute to the First Lady of Television spans Betty White’s more than 80-year career as a performer and star of such legendary series as The Mary Tyler Moore Show and The Golden Girls.

Chronicling 100 highlights from the acting life and passions that have defined an entertainment career like no other, Betty White: 100 Remarkable Moments in an Extraordinary Life - 2nd Edition includes:

White’s pioneering legacy extends back to the earliest days of TV in the 1950s, when she served as both producer and star of the sitcom Life with Elizabeth during an era that predated glass ceilings. The volume also vividly illustrates the beloved White’s lifelong love for animals as well as the masterful comic versatility she displayed even as she closed in on the century mark.

Betty White passed away on December 31, 2021, at just 17 days shy of what would have been her 100th birthday. This retrospective tribute to the trailblazing icon will help us hold Betty White, and all the good she stood for, forever in our memories.

Revel in Betty White’s talent, elegance, and spunk with this photographic retrospective of her life.

As an author, Richmond’s books include memoir collaborations with the 98-year-old stage and screen legend Janis Paige (Reading Between the Lines) and the famed character actor William Sanderson (Yes, I’m That Guy). His earlier books include the New York Times bestseller The Simpsons: A Complete Guide to Our Favorite Family, This is Jeopardy! Celebrating America’s Favorite Quiz Show, TV Moms: An Illustrated Guide, and My Greatest Day in Show Business. He lives with his wife Jill and son Dylan in Los Angeles.

Actor Gavin MacLeod was best known for portraying Captain Merrill Stubing on the long-running comedy The Love Boat and Murray Slaughter alongside his good friend Betty White on the 1970s-era sitcom The Mary Tyler Moore Show.

All events will be held virtually until further notice.
END_OF_DOCUMENT_TOKEN_TO_BE_REPLACED