The Other Einstein (CD-Audio) 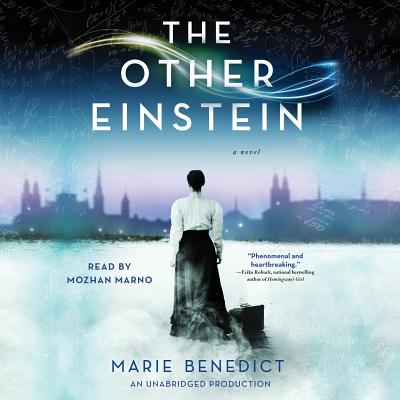 “To portray Einstein not as the scientific genius we have been led to know, but as a callous, manipulative human being is what Benedict brilliantly accomplishes. Could the highly intelligent Mileva Maric -- leading the bohemian life in 1890s Zurich -- pursue a nontraditional career in science and math and simultaneously maintain a traditional relationship with the young Albert Einstein? With historical flair, The Other Einstein presents a volatile life filled with moments of collaboration and sacrifice, humiliation and outrage, and a will to change forces to save one's own existence.”
— Mindy Ostrow (E), The River's End Bookstore, Oswego, NY

In the tradition of The Paris Wife and Mrs. Poe, The Other Einstein offers us a window into a brilliant, fascinating woman whose light was lost in Einstein's enormous shadow. This is the story of Einstein's wife, a brilliant physicist in her own right, whose contribution to the special theory of relativity is hotly debated and may have been inspired by her own profound and very personal insight.

Mitza Maric has always been a little different from other girls. Most twenty-year-olds are wives by now, not studying physics at an elite Zurich university with only male students trying to outdo her clever calculations. But Mitza is smart enough to know that, for her, math is an easier path than marriage. And then fellow student Albert Einstein takes an interest in her, and the world turns sideways. Theirs becomes a partnership of the mind and of the heart, but there might not be room for more than one genius in a marriage.

Once a New York City lawyer, Marie Benedict had long dreamed about a fantastical job unraveling the larger mysteries of the past as an archaeologist or historian -- before she tried her hand at writing. While drafting her first book, she realized that she could excavate the possible truths lurking in history through fiction, and has done so in THE OTHER EINSTEIN, the story of Mileva Maric, Albert Einstein's first wife and a physicist herself. Writing as Heather Terrell, Marie also authored The Chrysalis, The Map Thief, and Brigid of Kildare. She is a graduate of Boston College and the Boston University School of Law, and lives in Pittsburgh with her family.

All events will be held virtually until further notice.
END_OF_DOCUMENT_TOKEN_TO_BE_REPLACED