Four Walls and a Roof: The Complex Nature of a Simple Profession (Paperback) 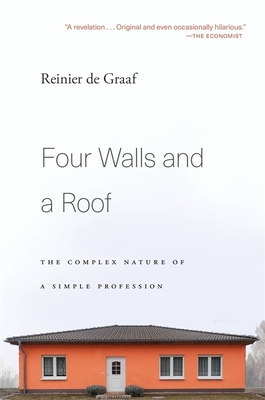 Architecture, we like to believe, is an elevated art form that shapes the world as it pleases. Four Walls and a Roof turns this fiction on its head, offering a candid account of what it's really like to work as an architect. Drawing on his own tragicomic experiences in the field, Reinier de Graaf reveals the world of contemporary architecture in vivid snapshots: from the corridors of wealth in London, Moscow, and Dubai to the demolished hopes of postwar social housing in New York and St. Louis. We meet ambitious oligarchs, developers for whom architecture is nothing more than an investment, and layers of bureaucrats, consultants, and mysterious hangers-on who lie between any architect's idea and the chance of its execution.

"An original and even occasionally hilarious book about losing ideals and finding them again... De Graaf] deftly shows that architecture cannot be better or more pure than the flawed humans who make it."
--The Economist

"This is a book about power, money and influence, and architecture's complete lack of any of them...Witty, insightful and funny, it is a (sometimes painful) dissection of a profession that thinks it is still in control."
--Financial Times

All events will be held virtually until further notice.
END_OF_DOCUMENT_TOKEN_TO_BE_REPLACED