The Hungry Tide: A Novel (Paperback) 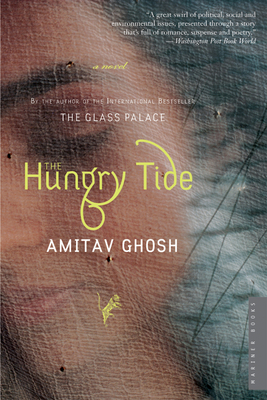 From Amitav Ghosh, award-winning and international best-selling author of the Ibis Trilogy, The Hungry Tide is a very contemporary story of adventure and unlikely love, identity, and history, set in one of the most fascinating regions on the earth.

A Finalist for the Kiriyama Prize for Fiction

Life is harsh in the Sundarbans, the treacherous islands in the Bay of Bengal where isolated inhabitants live in fear of drowning tides and man-eating tigers. Piya Roy is a young marine biologist, of Indian descent but stubbornly American, who has come here in search of a rare, endangered river dolphin. She enlists the aid of a local fisherman and a translator, and soon their fates on the waterways will be determined by the forces of nature and human folly.

Amitav Ghosh was born in Calcutta in 1956 and raised and educated in Bangladesh, Sri Lanka, Iran, Egypt, India, and the United Kingdom, where he received his Ph.D. in social anthropology from Oxford. Acclaimed for fiction, travel writing, and journalism, his books include The Circle of Reason, The Shadow Lines, In an Antique Land, and Dancing in Cambodia. Ghosh has won France’s Prix Medici Etranger, India’s prestigious Sahitya Akademi Award, the Arthur C. Clarke Award, and the Pushcart Prize. He now divides his time between Harvard University, where he is a visiting professor, and his homes in India and Brooklyn, New York.

"One doesn't so much read Ghosh's masterful fifth novel as inhabit his characters and the alluring if treacherous Sundarban archipelago...a lush backdrop for an intricate narrative." Publishers Weekly, Starred

"...lovingly and fanatically and even beautifully about a place...[Ghosh] has created a large, colorful story and a voluptuous world into which we gratefully disappear." O, The Oprah Magazine

"The Hungry Tide is a great swirl of political, social, and environmental issures, presented through a story that's full of romance, suspense, and poetry." The Washington Post

"Ghosh not only infuses great energy and spirit into an engrossing tale of caste and culture, he deftly introduces readers to a little-known world and makes it familiar." (Editor's Choice) Entertainment Weekly

"Amitav Ghosh tops my list of authors I wish readers everywhere would get to know better." Seattle Times/Post-Intelligencer

All events will be held virtually until further notice.
END_OF_DOCUMENT_TOKEN_TO_BE_REPLACED