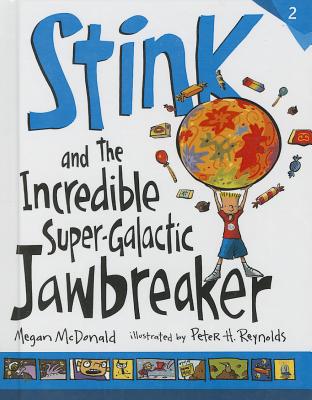 By Megan McDonald, Peter H. Reynolds (Illustrator)
Email or call for price.
Out of Print

This is book number 2 in the Stink (Numbered Pb) series.

Spurred by a newfound awareness of false advertising, Stink Moody becomes the proverbial kid in a candy store as his letter-writing campaign yields him heaps of free rewards (ages 5-8).
When Stink buys a mammoth jawbreaker that doesn't break his jaw, he writes a letter of complaint to the manufacturer - and receives a ten-pound box of 21,280 jawbreakers for his trouble This unexpected benefit of acing the art of letter-writing in school sure gets Stink thinking. Soon Stink is so preoccupied with getting free stuff sent to him that he overlooks a scribbly envelope in the mail pile - until his best friend, Webster, starts acting standoffish and looks as mad as a hornet.
In this hilarious new episode from Megan McDonald and Peter H. Reynolds, Judy Moody's shorter sibling truly comes into his own. As a delightful bonus for both teachers and kids, thirty-six common idioms - from "two heads are better than one" to "a leopard can't change its spots" - are sprinkled throughout the story; seven of the idioms are humorously illustrated by Stink, and all are listed at the end to inspire a search for idioms that's more fun than a barrel of monkeys.

Megan McDonald is the author of "Stink: The Incredible Shrinking Kid," as well as the best-selling, award-winning series about Stink's older sister, Judy Moody. She says, "Not long ago, I happened upon two kids in the candy section of my local grocery store who were in rapture over the almost snowball-size jawbreakers they'd discovered in a bin. I held up one of the tiny globes, a confetti-flecked miniature world unto itself. I knew immediately that Stink would have to have one . . . so I bought one myself, for inspiration. I like to think of it as research!"

Peter H. Reynolds is the illustrator of Stink's series debut, as well as all the Judy Moody books. He says, "My childhood was a bit Stink-ish. I craved candy - especially chocolate - after reading" Charlie and the Chocolate Factory." So much so that I wrote to the Hershey chocolate company, and they sent me a packet of information, posters, and sample cacao beans!"

All events will be held virtually until further notice.
END_OF_DOCUMENT_TOKEN_TO_BE_REPLACED