The Aftermath: The Last Days of the Baby Boom and the Future of Power in America (Hardcover) 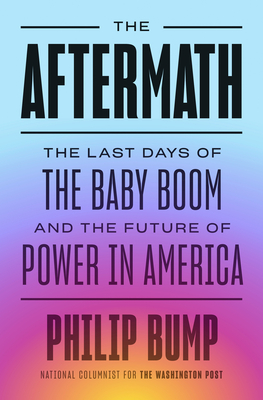 “Philip Bump helps us understand that no matter the troubles of our days, the future of this nation rests with what we do now. And that means all of us—not just Baby Boomers.” —Eddie S. Glaude, Jr., James S. McDonnell Distinguished University Professor, Princeton University

A popular Washington Post columnist takes a deep dive into what the end of the baby boom means for American politics and economics.

Philip Bump, a reporter as adept with a graph as with a paragraph, is popular for his ability to distill vast amounts of data into accessible stories. THE AFTERMATH is a sweeping assessment of how the baby boom created modern America, and where power, wealth, and politics will shift as the boom ends. How much longer than we'd expected will Boomers control wealth? Will millennials get shortchanged for jobs and capital as Gen Z rises? What kind of pressure will Boomers exert on the health care system? How do generations and parties overlap? When will regional identity trump age or ethnic or racial identity? Who will the future GOP voter be, and how does that affect Democratic strategies? What does the Census get right, and terribly wrong? The questions are myriad, and Bump is here to fight speculation with fact

Writing with a light hand and deft humor, Bump helps us navigate the flood of data in which our sense of the country now drowns. He fits numbers into a narrative about who we are (including what "we" really means), how we vote, where we live, what we buy—and what predictions we can make with any confidence. We know what will happen eventually to the baby boomers. What we don't know is how the boomer legacies might reshape the country one final time. The answers in this book will help us manage the historic disruption of the American state we are now experiencing.

Philip Bump is a national columnist for The Washington Post; before that he led political coverage for The Atlantic Wire. One of the paper’s most read writers, he focusses on the data behind polls and political rhetoric. He has been on most major media outlets, from MSNBC’s “Morning Joe” to Fox News’s “Special Report,” and on NPR and PBS.

“[A] highly detailed, data-driven, definitive story of how baby boomers changed America and a little forecasting of what might come next...Bump is a reliable, honest narrator who leans into complexity and refuses simple or singular explanations.” --The Washington Post

"Bump leaves no stone unturned as he takes a detailed look at the rise of the baby boom generation, its impact on the United States and the implications of its final days." --AP News

"Draws on a tsunami of data in an immensely informative assessment of the last days of the baby boom generation and its impact on politics, education, religion and the economy of the United States." --Pittsburgh Post-Gazette

"The Aftermath is stuffed with enough charts and graphs to make any data-driven wonk swoon...In between, in clear and lively prose, Bump delves into the changes the baby boom wrought on America and looks ahead at the effects they still might have, on the economy, politics and more." --Tampa Bay Times

“Smart, insightful and elegantly written, The Aftermath is a powerful and provocative account of the generational shift that lies at the heart of our current national malaise. The Baby Boomers are not going away quietly. The question is, will American democracy survive this tumultuous transition? Marshalling the voices of a wide range of Americans, Philip Bump helps us understand that no matter the troubles of our days, the future of this nation rests with what we do now. And that means all of us—not just Baby Boomers.” —Eddie S. Glaude, Jr., James S. McDonnell Distinguished University Professor, Princeton University

"Whether we're talking about politics, the economy, culture or generational shifts in America, who doesn't want to know 'what's going to happen next?' Amidst so much change and disruption, it's almost impossible to see the future clearly, but Philip Bump manages to do just that. A lively, engaging, and provocative read, The Aftermath covers the contours of the Baby Boomers' many contributions and failures, while laying out the stakes for the future of equity, power, and everything that matters in American life." —CNN Political Commentator, S.E. Cupp

“Baby boomers are a generation so huge — and so contradictory — as to be almost a mystery to itself and to others, at least until Philip Bump came along. With charts (and more charts), Bump combs out the tangles and tells a story about power, and influence, and the passage of time. What will happen when the most educated and wealthy generation that the world has ever seen is gone? No one knows for sure. But Bump seems to know better than most. This is essential reading.”—Katy Tur, Anchor of Katy Tur Reports, MSNBC


"As one of the very first Gen Xers (b. January 1965), it was a pleasure to read this impeccably researched, data-driven survey of modern America and see it finally proved, with charts no less, that none of our troubles are in any way my fault." —Peter Sagal, Host, NPR’s “Wait Wait…Don’t Tell Me!”

Events may be virtual or in person. Please see details for each event.
END_OF_DOCUMENT_TOKEN_TO_BE_REPLACED