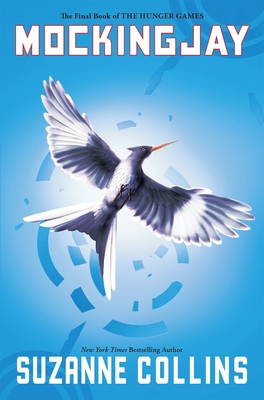 By Suzanne Collins
$12.99
On Our Shelves Now

This is book number 3 in the Hunger Games series.

"My name is Katniss Everdeen. Why am I not dead? I should be dead."

Katniss Everdeen, girl on fire, has survived, even though her home has been destroyed. There are rebels. There are new leaders. A revolution is unfolding.

District 13 has come out of the shadows and is plotting to overthrow the Capitol. Though she's long been a part of the revolution, Katniss hasn't known it. Now it seems that everyone has had a hand in the carefully laid plans but her.

The success of the rebellion hinges on Katniss's willingness to be a pawn, to accept responsibility for countless lives, and to change the course of the future of Panem. To do this, she must put aside her feelings of anger and distrust. She must become the rebels' Mockingjay - no matter what the cost.

Suzanne Collins is the author of the bestselling Underland Chronicles series, which started with Gregor the Overlander. Her groundbreaking young adult novels, The Hunger Games, Catching Fire, and Mockingjay, were New York Times bestsellers, received wide praise, and were the basis for four popular films. She returned to the world of Panem with The Ballad of Songbirds and Snakes. Year of the Jungle, her picture book based on the year her father was deployed in Vietnam, was published in 2013 to great critical acclaim. To date, her books have been published in fifty-three languages around the world.

Praise for Mockingjay:
#1 USA Today Bestseller
#1 New York Times Bestseller
#1 Wall Street Journal Bestseller
#1 Publishers Weekly Bestseller
A New York Times Notable Children's Book of 2010
A New York Times Book Review Editors' Choice
A 2010 Booklist Editors' Choice
A 2010 Kirkus Best Book of the Year
A Publishers Weekly Best Book of 2010
"Fans will be happy to hear that Mockingjay is every bit as complex and imaginative as Hunger Games and Catching Fire."
-Entertainment Weekly
"Suspenseful... Collins' fans, grown-ups included, will race to the end."
-USA Today
"At its best the trilogy channels the political passion of 1984, the memorable violence of A Clockwork Orange, the imaginative ambience of The Chronicles of Narnia and the detailed inventiveness of Harry Potter."
-New York Times Book Review
"Unfolding in Collins' engaging, intelligent prose and assembled into chapters that end with didn't-see-that-coming cliffhangers, this finale is every bit the pressure cooker of its forebears. [Mockingjay] is nearly as shocking, and certainly every bit as original and thought provoking, as The Hunger Games. Wow."
-Los Angeles Times
*"This concluding volume in Collins's Hunger Games trilogy accomplishes a rare feat, the last installment being the best yet, a beautifully orchestrated and intelligent novel that succeeds on every level."
-Publishers Weekly, starred review

All events will be held virtually until further notice.
END_OF_DOCUMENT_TOKEN_TO_BE_REPLACED