Chomp of the Meat-Eating Vegetables: A Branches Book (The Notebook of Doom #4) (Paperback) 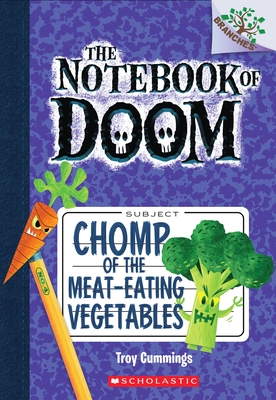 This is book number 4 in the The Notebook of Doom series.

What could be more monstrous than giant vegetable monsters?!
This series is part of Scholastic's early chapter book line called Branches, which is aimed at newly independent readers. With easy-to-read text, high-interest content, fast-paced plots, and illustrations on every page, these books will boost reading confidence and stamina. Branches books help readers grow!

In this fourth book, Alexander is still on the look-out for monsters. Now he thinks they're at school.... The lunch menu is NOT normal -- instead of good-for-you meals, there's ice cream and pie every day. His whole class is crying. And his friend Rip goes missing. Alexander must battle giant meat-eating vegetables before the whole town becomes veggie dinner! Filled with humor, suspense, and zany black-and-white illustrations, this book will keep kids turning the pages!

Troy Cummings has been drawing since he was a little kid. His illustrations have appeared in newspapers and magazines, on websites, on frozen-fish-stick packages, and in hospital waiting rooms. His picture books include The Eensy Weensy Spider Freaks Out!, More Bears!, and Giddy-Up, Daddy! The Notebook of Doom was his first early chapter book series. He lives in Indiana with his cat and family.

Praise for THE NOTEBOOK OF DOOM #1: RISE OF THE BALLOON GOONS
"Cranking up the horrorlarity with googly eyed cartoon figures and sight gags on nearly every page, Cummings pitches his nervous but resourceful newcomer into a climactic, all-out battle with an entire army of aggressive, air-stealing bendy balloons.... An unusually promising series opener for proto-Goosebumps fans." -KIRKUS REVIEWS

Praise for MORE BEARS!
"[Artwork that is] infused with zaniness of fun." -SCHOOL LIBRARY JOURNAL

All events will be held virtually until further notice.
END_OF_DOCUMENT_TOKEN_TO_BE_REPLACED